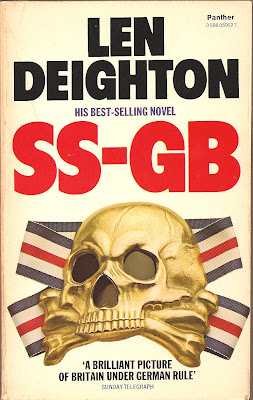 The SS are in residence at Scotland Yard; King George is in the Tower; Churchill has been executed. London is in ruins. And the details in the bomb-blasted backdrop are vivid and startling to any Londoner. In one scene, our hero, D.I Archer (now in the employ of the SS) takes a short cut into Soho through the wreckage of the Palace Theatre – meanwhile, the Metropole music hall on the Edgware Road is still standing.

In perhaps the most delicious detail, Archer drives both ways along the (now strictly one-way) Tottenham Court Road. These snapshots of an alternative London leap out of a characteristically compelling Deighton narrative, buttressed by his trademark meticulous period research. In the year after Ian Fleming’s centenary, why not commemorate Len Deighton’s 80th birthday year by flicking through the pages of this his most memorable London novel. (The edition shown is the 1980 Panther paperback.)