Blog Extra (Or… NOT so Elementary) 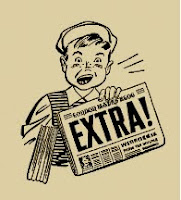 After a frantic day of to-ing and fro-ing at the rumour mill here in London (17th Aug), in which Brad Pitt was confirmed, denied and then confirmed again to play Moriarty in a hastily re-shot version of Guy Ritchie’s forthcoming blockbuster movie version of Sherlock Holmes, Warners Bros, the studio behind the picture, released the following statement:

“The report in today’s London Mirror is completely inaccurate. Brad Pitt is not joining the cast of Sherlock Holmes and we're extremely pleased with the production of the film. As planned, it will be released on Christmas Day, 2009. In order to complete the movie, we've scheduled a few days on set to shoot a couple of additional scenes, obtain pick-up shots, and perfect some of the visual effects elements, all of which is standard filmmaking practice.”

So that’s that settled, then.

What we do know is that London Walks’ In the Footsteps of Sherlock Holmes meets this (and EVERY) Friday at Embankment Station 2.00p.m.

Rumours that Brad Pitt will be guiding this Friday’s walk are yet to be confirmed, but watch this space…