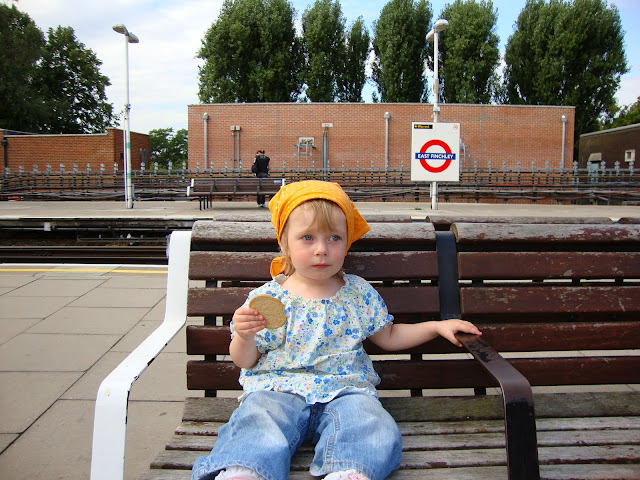 There is a bridge in north London that crosses the High Barnet Branch of the Northern Line. It has no name, save its official soubriquet of Bridge HB30. It’s not much to look at. Nobody knows the architect. It sits just north of East Finchley station, the last open air platform before the trains plunge into what was once the world’s longest tunnel, to emerge at Morden, the southernmost terminus of the Northern Line 17.3 miles and 26 “Mind the Gap” announcements later. The locals pay the bridge little heed as they traverse Church Lane, N2. Unless those locals are parents of young children…

This is by way of a BIG ‘Thank You’ note to all the drivers on the High Barnet Branch of the Northern Line. Especially to all those drivers who are jolly enough to wave at my two-and-a-half-year-old daughter Isobella (that's her, above) and all the other local children whose parents lift them up above the wall on the bridge outside East Finchley station to see the trains.

Special thanks go to the drivers who are also stylish enough to parp the train’s whistle whilst waving. Nice touch. Isobella loves it.

When I ask my daughter of a morning, “What do you want to do today?” the answer “See the trains,” is invariably near the top of her wish list.

One more thank you: there are those of the opinion that London is unfriendly and cold to the core. Thanks Northern Line drivers for proving them wrong.


POST UPDATED 2/3/16: Isobella is nearly 9 now, and no longer waves to the tube drivers every day. But I still see families with younger children every time I pass by, peering expectantly over the wall, and I regularly hear the toot of the train whistle. Keep up the good work, guys!