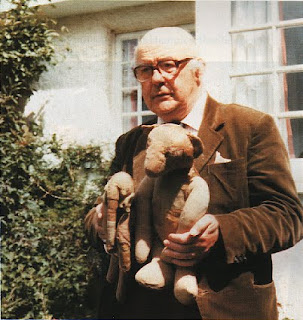 Do you still own your childhood teddy bear? As you can see from this picture (above), Sir John Betjeman kept both of his. As an only child he regularly confided his emotions into the ears of Archibald the Teddy Bear. Here is an extract from the poem he dedicated especially to him…

Those woollen eyes, the things they’ve seen
Those flannel ears, the things they’ve heard –
Among horse-chestnut fans of green,
The fluting of an April bird,
And quarrelling downstairs until
Doors slammed at 31 West Hill.
The dreaded evening keyhole scratch
Announcing some return below,
The nursery landing’s lifted latch,
The punishment to undergo –
Still I could smooth those half-moon ears
And wet that forehead with my tears.
To hear more about Betjeman's childhood, come along on Lance Pierson's guided walk around Highgate this Sunday. See where Betjeman was born, grew up and went to school – and hear the poems written there read aloud in the spring sunshine.

Poetry in Motion – The John Betjeman Walk meets at Kentish Town Station on Sunday 25th April at 2.30p.m. (Be ready for a good, stiff climb up West Hill!)