Plaque of the Week No.36 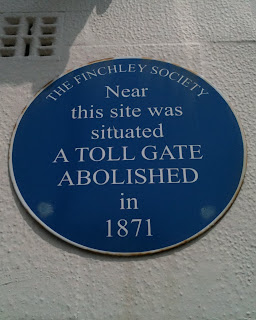 By 1857, according to an article in The Illustrated London News that year, toll gates in London were “upwards of 100 in number”. Tottenham Court Road, Tyburn, St George’s in Southwark were all toll gate locations. Many were set up between the 1750s and 1770s to raise money for the upkeep of poor roads, with some central London tolls being in the region of five shillings for a day – a forerunner of the modern congestion charge. At Tyburn the charges ranged from a carriage drawn by at 10d to drovers at 5d for 20 oxen and 2d for 20 pigs. Georgette Hayer’s Regency novel The Toll Gate features just such a location.

For Walks in the borough of Barnet keep an eye on the From the Repertoire section at www.walks.com.