Plaque of the Week No.39 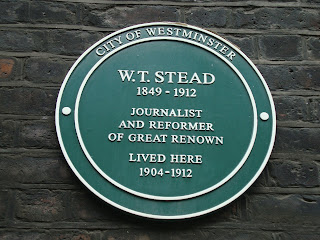 Campaigning journalist W.T Stead was born in 1849 at Embleton, Northumberland. His writing career began on the Northern Echo based in Darlington and, in 1880. He moved south to become deputy editor of the fabled Pall Mall Gazette. Three years later he assumed the editor’s chair. In this post he is the man responsible for introducing the interview as a feature of British newspaper publishing.

Keep an eye out for his plaque on the Westminster Walk.