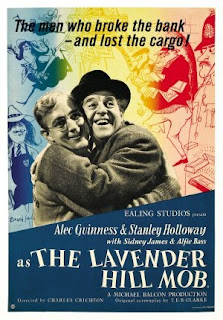 “Too many to choose just one,” he smiled, and proceeded to share a few of his faves with us. We’ll share them with you this week here on the blog, along with your own choices that you’ve been posting on Facebook and Twitter. You can email your suggestions to the usual address by clicking on the envelope icon at the bottom of this post.


“The Pool of London and The Lavender Hill Mob: brilliant showcases of the post-war, bomb-ravaged city with great performances all round. Shows the versatile repertoire of Ealing Studios: the one, a serious drama with a near-documentary feel at times; the other, a classic comedy thriller (see London on Film this Sunday."