Plaque of the Week No.41 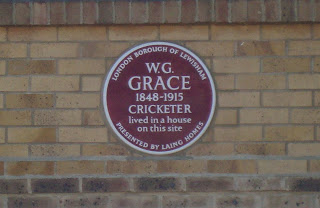 Now that the World Cup is almost over, we can get back to the natural order of things in an English summer: Cricket. And who better than perhaps the most famous cricketer of them all to help us?

Dr William Gilbert Grace – W.G to cricket devotees – is synonymous with cricketing records: first batsman to score a century in a first class match before lunch (for Gentlemen of the South versus Players of the South at The Oval in 1873); he played first-class cricket for 44 seasons, from 1865 to 1908; he made his farewell at Grove Park on 25 July 1914, playing for Eltham Cricket Club a week after turning 66 years old. It was once suggested that only Queen Victoria and William Gladstone were more recognisable than Grace as public figures.

He collected almost as many nicknames as he did records, “The Doctor” (he was a medico by trade) and “The Old Man” being popular epithets. But perhaps he is best summed-up with the well-earned soubriquet “The Champion”.