Plaque of the Week No.42 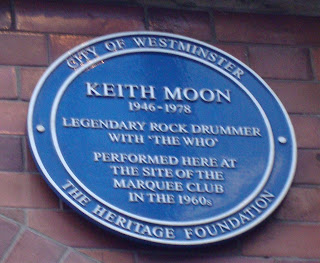 When the brothers Gallagher of Oasis sauntered up Berwick Street in a Sunday morning dawn following a night of rock’n’roll excess, the steps they took were far from pioneering ones. When the words “rock’nroll excess” are being bandied about, nine-times-out-of-ten the man who set the hotel room-trashing, hard-drinking benchmark was the drummer of The Who, Keith Moon.

You won’t have to wait around too long in London to find someone of the opinion that such bad behaviour is hardly plaque-worthy. But as we get on for half-a-century since the so-called Swinging Sixties, more and more of that generation’s famous sons and daughters are being commemorated.

Moon remains one of the most respected drummers of the era, driving The Who’s singles, albums and rock operas from 1963 to 1978. The plaque also commemorates The Marquee, one of the leading Soho music venues from the 1960s to the 1980s. The club gave a stage to the leading lights of both the 60s R&B boom (The Stones, The Moody Blues) and the Punk Movement (The Stranglers, Generation X). The Wardour Street club closed in 1988. It outlasted Moon by a decade. Keith Moon died in 1978 at the age of 32. His other London plaque can be found in the Garden of Remembrance at Golders Green Crematorium.