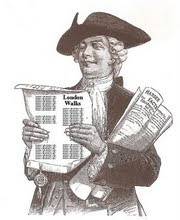 Next Monday 12th July sees our third Pub Quiz Walk – The Fleet Street Half & Half (half walking tour, half pub quiz), meeting at Temple Station at 7pm.

To whet your appetite, here are a few questions from the last Half & Half walk/pub quiz which took place in Hampstead earlier this year… more questions – and answers! – later in the week.

1. Three Queens are commemorated in statue form along the length of Fleet Street. Which Queens?

2. Who was the last Prime Minister to die at Downing Street?

3. The three orange squares on the English Monopoly board – Vine St., Marlborough St. & Bow St. – are, unlike the other colour groupings, in three different neighbourhoods. Why are they grouped together? What links them?

4. Who was the last British winner of a singles title at the All England Lawn Tennis and Croquet Club – popularly known as Wimbledon?

5. “The Tottenham Sound Has Crushed The Beatles!” Thus ran a Daily Express headline from January 1963 (!). Which group were purveyors of the so-called “Tottenham Sound”?