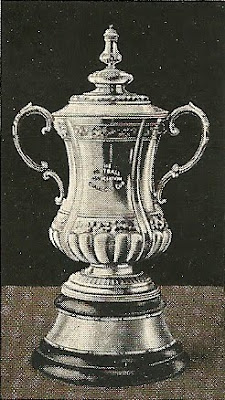 Saturday 14th August 10.20 a.m… The big sports news today in London is the start of The Premiership football season. Tottenham Hotspur, Arsenal, Chelsea, West Ham and Fulham all kick off their campaigns this weekend.

But in true London Walks style, we'll turn away from the famous spectacle and dig up a lesser-known detail of the world's greatest team sport. Today (14th August 2012) sees the Extra Preliminary round of soccer's most famous domestic club cup tournament. And we'll follow it every step of the way here on the LW Blog.

Scrolling down the fixture list to find a competing London side at random we alight upon… Clapton F.C.

Just a few miles to the east of the great, multi-million pound stadia of Arsenal and Chelsea – but a world away in terms of glamour and wealth – Clapton F.C (founded 1878) begin their long journey toward Wembley next May with a home tie against Stanway Rovers at The Spotted Dog Ground.

Not to be confused with Clapton Orient (which is a previous name of the League outfit Leyton Orient), Clapton F.C was one of the founder teams of the great Isthmian League – named for the ancient Greek Isthmian Games, and an allusion to the sworn amateur ethos of all the teams involved.

Saturday 14th August 8.30p.m…
Things didn’t, we’re sorry to report, go too well for Clapton this afternoon at the Spotted Dog Ground. Their improbable journey to Wembley was put on hold for another year by Stanway Rovers of Essex to the tune of 4-0. But among the London teams to go through to the First Preliminary Round were Bethnal Green United, Haringay Borough and Cockfosters. Ironic to report also that Wembley will NOT be going to Wembley either. They lost 3-0 to Witham Town.

Catch up with a potted history of Clapton F.C at the great football blog The Cold End.