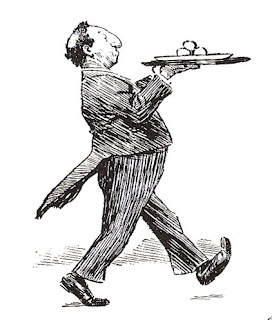 Shooting. Hanging. Gruesome goings-on in the spare bedroom. A ghosts and murder London Walk? Nothing of the sort: Ann’s on the foodie trail again…

“The only consolation for summer apparently ending in August is the arrival of the game season. The Glorious Twelfth is a bad day for grouse but a good day for sportsmen. You’ll have to wait until September 1 for partridge, wild goose and duck, and until October 1 for pheasant. Beware the pheasant which appears oven ready in September on the butcher’s counter – it will have spent the summer in the deep freeze.

The rearing of pheasants and partridges is big business – you can pay up to £800 for a day’s shooting. Chicks are reared intensively then sold on to shoots, released when they are large enough, and eventually take their chances with the guns. Grouse, though, are not hand reared – they grow up in the old fashioned way.

There’s always a glut of game recipes around in September. The challenge is to cook these birds without drying them out to cardboard consistency, and this is much easier to do if they’ve been hung. However, it’s very hard to find a pheasant that has been hanging around long enough to have a really interesting taste. Traditionally they should be hung until the tail feathers can be pulled out easily, and there are plenty of gruesome accounts of unwilling guests being served something that has a greenish tinge.

I used to buy pheasant in feather then hang them until they reached perfection. Pheasant plucking, as well as being the subject of many a pun, is a tedious business unless you’re very practised, and I gave this up after leaving a brace of pheasant hanging for too long in the spare bedroom. I’ll spare you a description of what I found when I opened the door...

When they’re young you can roast them. When they’re old and grizzled (check their feet, if they’re still attached), how about a casserole? And here’s a nice suggestion from Dorothy Hartley’s Food in England (1954, but reprinted in paperback) for your own poached pheasant:

Smear the inside of a paper bag with treacle, add a few raisins, and prop it up along a row of peas. The pheasant will come along in search of peas, stick his head in the bag, be unable to see where to go next, and will wait patiently until you come out to snaffle him.”

There’ll be more suggestions for Sunday lunch on Ann’s next Foodie Walk. Join her at 10 am on Saturday August 28, Monument tube, Fish St. Hill exit. Enjoy a video preview HERE.