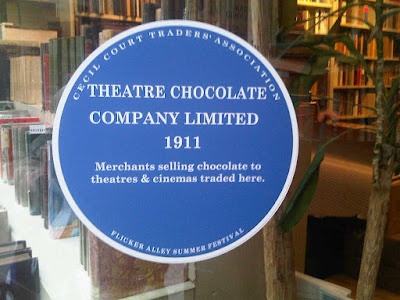 Every true London Lover’s favourite shopping street, Cecil Court is currently home to a series of unorthodox “plaques” – adorning the windows of the eclectic shops where one can buy those most delicious of London commodities: things you didn’t know you needed until you saw them. First edition books, handmade jewellery, antiques, posters, old banknotes, puppet theatres: Cecil Court is surely London’s loveliest shopping enclave.

The people at tenderproduct.com (10 Cecil Court) are behind the new “plaques” – window stickers along Cecil Court reminding us that this narrow alley between St Martin’s Lane and the Charing Cross Road was once the home of the fledgling British film industry – nicknamed Flicker Alley.

The “plaques” were originally conceived to publicize the Tenderpixel S Experimental Film Festival at the end of July 2010 – but are (ahem) sticking around in the few weeks after the festival. “We’ll probably take them, down,” one shop owner told me, “when the window display changes or when we put up the Christmas decs.”

So hurry up and catch them – like film itself, these “commemorations” are wonderful and ethereal – a delight today but soon to be replaced by Forthcoming Attractions.