David marks our 500th London Walks Blog post. (Ask him all about it on his Along the Thames Pub Walk tonight and EVERY Friday)…

"London Walks. Amongst other things they're a three-way conversation.

1) Between London Walks guides and London Walkers. We – London Walks guides – put it bluntly. And gleefully. 'We get a (much) better class of client than any other concern that's in the business of showing people around London'. There are lots of reasons for that. One being that London Walks attracts independents. Travellers as opposed to tourists. We don't vacuum pack you – pick you up at your hotel in, ugh, a coach. Drop you off at your hotel from, ugh, a coach. You have to have the confidence and intelligence and nous to be able to move around London under your own steam. Have to be able to get to us where we meet up for our walks. Be able to use the Tube in other words. And you can add to this part of the 'conversation': better guides. Not just better guides. The best guides in London. You can add that to this part of the "conversation" because better guides, the best guides attract better, best, bestest clients. Simple, really.

2) Second part of that three-way conversation is of course the ongoing one between London and London Walks guides.

3) Third part is the one between London Walks guides and London Walks guides. One of the wonderful things about this very special little number is its collegiality. London Walks guides talk and share. We're on the phone to one another – or over a brew – all the time: "hey, guess what I've just found out about Lincoln's Inn (or Little Britain or Mansfield Place or Roupell Street or the 1908 Olympics or the 1348-1530s 'connection' or...whatever".

Going to speak personally now. I'm blessed. This is the most stimulating city on the planet. It's why I live here. Decided a long time ago that for me the most important thing of all was never to be bored. London effortlessly bestows that very special gift. You have to be seriously mentally underpowered to be bored in this town.

And to that, the turbo charge. The turbo charge of having London Walks guides as colleagues. It was more than slightly mannered – let alone precious – of my younger self to trot out the phrase, 'I'm never bored when I'm around.' But it's not at all mannered or precious to recast it thus: 'I'm never bored when my colleagues are around'. It's plain (putting it that way, I mean). And it's true.

Now often – indeed, all the time – all three of the above 'come together'. Here's a case in point. London Walks guide Adam made a great find last week in a dusty little second-hand bookshop in London. He found a 62-year-old copy of The Strand magazine. 62-years-old to the day of the High Jump Finals of the 1948 London Olympics. (see pic below.) Pop goes the wizardry. Because the wonderful image from that find ends up being the centrepiece for a tasty little London anniversary item on the London Walks blog.

Which of course is by way of saying: London Walks guides are a bridge through time.

Point that sometimes needs to be made, though, is that that bridge goes both ways. Back in time, yes. All the time.

But that 'bridge' also goes in the other direction – into the future.

One London future that's spectacularly heralded – like so many rosy fingers of dawn – just now is the 2012 Olympics. 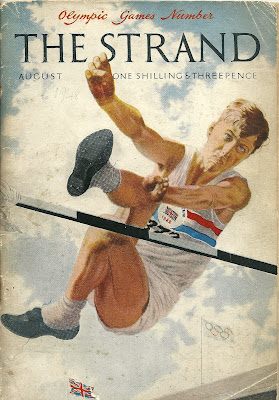 Adam's working with a 1948 Strand Magazine cover. I'm working with a contemporary publication, The Guardian. It's got a story about the Games Lane. A story headlined, 'Life in the fast lane for Olympic officials in 2012...but traffic jams for everyone else'. The Games Lanes are '60 miles of London road lanes reserved for use exclusively by the "Olympic family"'. The kicker being just how broad church that 'Olympic family' designation is. It's not going to just cover the athletes and their coaches and the Olympic officials. It's also going to include 25,000 'marketing partners'. 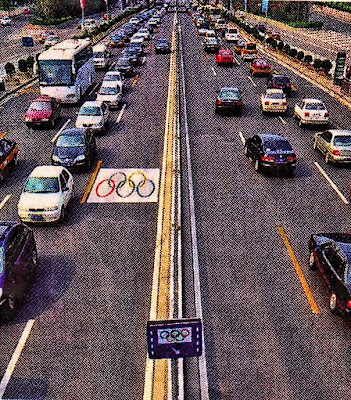 Well, we've always had a teensy taste of this kind of thing. When a visiting dignitary is in town – or a top pol or a member of the royal family is "moving about" – teams of motorcycle police 'clear the way'. The rest of us wait. 'They' sail right along. Oh for the days when the pols at any rate have to travel just like the rest of us.

And of course the whole thing puts one in mind of that Moscow car lane that was sacrosanct for the likes of Brezhnev and co. so that the 'we're all equal but some are more equal than others' Soviets could get to their dachas without having to put up with the inconvenience of sharing the same road space with ordinary Muscovites.

So as a Londoner, I'm wondering – and, alas the Guardian didn't 'go there' – will those exclusive lanes be permanent? It wouldn't surprise me if they were.