It's A London Thing No.6: The Phoenix Cinema

This month The Phoenix does as phoenixes do: it rises again on the 10th September after a birthday makeover.

Set in an otherwise unremarkable stretch of the East Finchley High Road, The Phoenix Cinema celebrates its centenary this year. The building, with its blend of Edwardian solidity and ArtDeco flourishes is Grade II listed, has been known variously asThe Phoenix, the East Finchley Picturedrome and The Rex. It is run by a charitable trust on behalf of the people of North London. 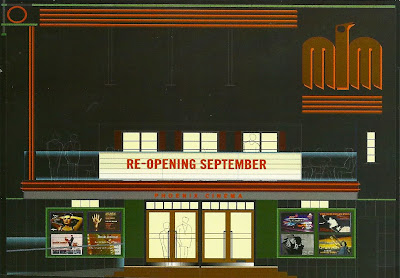 Adored by local celebs and civilians alike, The Phoenix is believed to be the oldest purpose-built, continuously running independent cinema in the UK. With moviegoing an increasingly homogenized experience in the 21st Century multiplexes – where one could be anywhere in the world from Birmingham, England to Birmingham, Alabama – the Phoenix is a true oasis. East Finchleyites and Londoners generally are proud of its unique charms.

Independent cinemas all over the UK have been closing down at an alarming rate these past couple of decades. But not the Phoenix. We like to think it will be here until the ravens fly the Tower. Even its name conjures up something of London's historic spirit. Get a Zone 3 Oyster Card and come to the pictures in style. It's a London Thing.

(The West End on Film Walk is this Sunday at 11.00a.m meeting at St James's Park Station.)