Plaque of the Week No.68

You've seen them all over the city: discs, tablets, cameos and plaques commemorating the great and the good of London Town. Every Tuesday we track down a London plaque (Blue or otherwise) and put it centre stage on the The Daily Constitutional. This week… 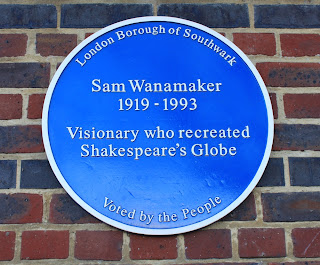 Is there a more provoking, a more moving, a more inspirational plaque anywhere in London than the one on the wall around Shakespeare’s Globe Theatre dedicated to Globe founder Sam Wannamaker?

Firstly, we love the openly emotive tone of the thing. These blue discs have scant space to tell a story, so often we are left with prosaic CV expressions of a life: Statesman, Physicist, Explorer – all great things to be. But here we have nothing less than a visionary. One doesn’t see many openings in the want ads for visionaries.

Secondly – and here’s the one that sticks in some British craws – it took an American to give us the living monument to the man who gave us our language. For this relief, much thanks.

Inspirational? Easily. Shakespeare’s Globe was, in terms of Wannamaker’s lifetime, decades in the making. The moral of the tale: if you’ve got a good idea, DON’T take no for an answer.

See the Globe on the Along the Thames Pub Walk.