The Bells Are Ringing…

Did you think it was all over? Far from it! All over town today from St Clement's to St Martin's to… 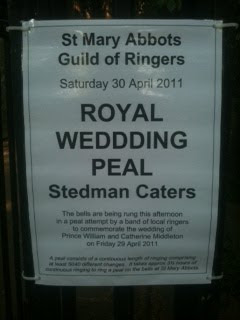 … the bells were ringing for Will and his gal. David sent in the notice (above) from his Kensington Walk this afternoon. Here's the church in question, St Mary Abbots… …and the Royal Wedding Walk – updated and improved! – continues this Monday. Click HERE for details. 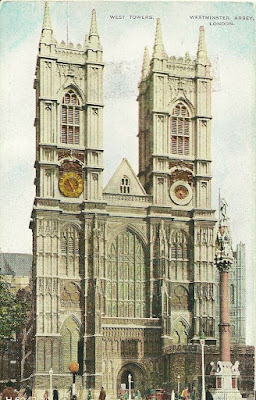 It’s nice and peaceful here today outside Westminster Abbey on a Friday with everyone at work. Hardly a soul around.

Wish you were here 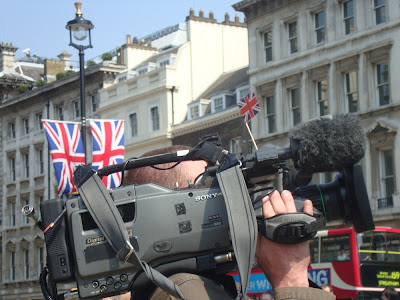 Enjoy the Big Day, everyone!

It's Royal Wedding Week: One Day to Go

Here’s David on The Monarchy… 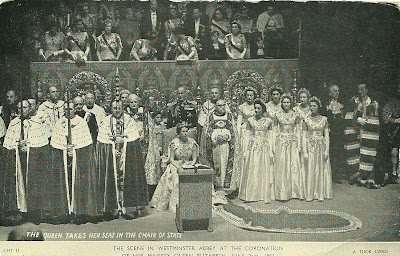 "There'll always be an England."

So runs the famous line.

But maybe it should read "this throne of kings will always be."

That's certainly one of the subtexts of The Big Show.

Understandable given the wave of "we're all in this together" fervour and feeling that the whole country - and indeed much of the world - seems to be riding this week, Countdown Week.

Even the weather seems to have "bought in".

Poor old anti-royalists* - small r republicans - are shaking their heads in despair. Some of them - one suspects - are that close to folding their hands and joining the party.

Which is the cue - very London Walks, this - for turning to the well of history. We turn to the w. of h. 1) because it's interesting and 2) because of the perspective it provides.

So let's amble back a couple of hundred years and "take a monarchy vs. republican 'reading'" in those days.

For the crown it was certainly unsteady as she goes.

As one eminent historian delightfully puts it, people "thought England was driving to a republic. For 150 years the innate English loyalty to the monarchic principle had been undermined by the iconoclastic Whig contempt for royalty and its pomps and gewgaws, by a race of foreign rulers on the throne and during the last four decades by the vagaries and indecorums of the royal family. These had reached their climax in 1821 in the spectacle of a stout, vulgar and hysterical German Queen vainly attempting amid the plaudits of the mob to force an entry into the Abbey at the coronation of her adulterous and bigamous spouse. Since the death of Charles II, the royal England of Elizabeth and the Plantagenets had been transformed almost unknowingly into oligarchy. A sovereign sat on the throne and went through ancient forms, but the aristocracy governed....The real rulers of England were still the greater squires. In the course of a century and a half of splendid, unblushing corruption they had inch by inch pared the powers both of the Crown and of the smaller squirearchy. In the later 18th century, in their hunger for even more land, they had even destroyed the English peasantry."

To take survey: the Whigs are long gone and the "greater squires" are at best a pale shadow of their forbears. They're the ones who shuffle through the "ancient forms" while the money boys do the "governing". As for the other half of the equation -the crown - oi vey, where to start (let alone where does it all end!).

1) Pomps and gewgaws. They certainly haven't gone the way of the Whigs. Indeed, they're more splendiferous than ever.

2) Same goes for vagaries and indecorums. "That" telephone conversation comes to mind of course. The POW - how often must the Prince of Wales (indeed the whole "firm") have felt like a prisoner of Fleet Street's wars! - saying unimaginably intimate things down a cellphone wave to Camilla and the whole country listening in. Squirm. Ouch.

4) Foreign rulers on the throne. Well, take a fingernail to the House of Windsor on History's scratch card and what you're going to bring up of course is the House of Saxe Coburg. Hell, for some bizarre reason - and largely thanks to his mum's genetic input - Prince William looks like something straight out of central casting for a Wagner opera.

But so what? So what in every sense. Not least historically. In short, as tribes go they don't come any more Germanic than the English. Mongrel Germanic - which is an entirely good thing. But Germanic.

Anything else? Yes. Many happy returns of the day. To all of us. The Big Show is our show as well as their show. Just imagine the thing without the supporting cast and you'll get my drift.

*And let me own up here, I've got a fairly strong streak of sympathy for the UK they'd like to see come into being. I'm the London Walks guide, after all, who said 'no thanks' to a chance to meet the Queen.

Here’s how we did it back in ’53 – the Coronation of Queen Elizabeth II.

The cover of the leaflet and map produced in a collaboration between London Transport, British Railways and the Metropolitan Police… 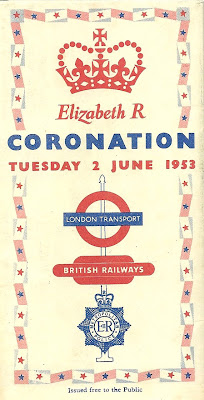 Some general information – “You will be hungry: It would be wise to bring refreshments with you.” (You may like to read this aloud in a clipped, BBC, public information film-style voice.) 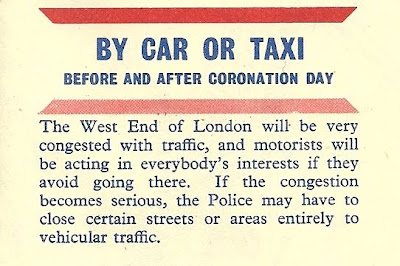 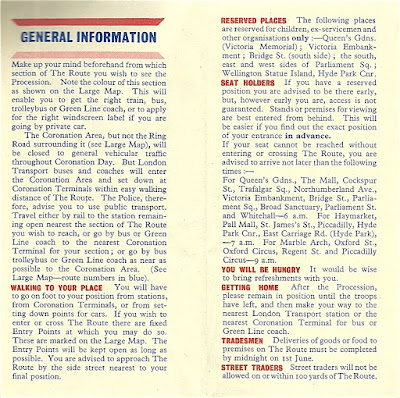 It's A London Thing No.33: The Royal Wedding II


If you're in the capital right now, then you'll be in no doubt that Friday's Royal Wedding is most definitely A London Thing. But every country in the world has their own angle on our tale.

In DUBLIN they’re a little skeptical… “The fact that so many standing along the Mall will be foreign tourists, while locals use the four-day bank holiday weekend to get away to the sun, will be proof that the royals are merely part of an international celebrity set, divorced from ordinary life.”

In EDINBURGH – where they are having their own Royal Wedding later this year – The Scotsman reports that “Neighbours Brenda Cheyne, Jill Bauer, Susan Herbert and Karen Forsyth are hosting a Street Meet in Corstorphine. Forsyth says: ‘The way we see it, this day off work is a great opportunity to boost community spirit – chances like this don't happen very often. We aren't huge royalists, but, as one of the mums said, they are a nice couple, and well matched. And we're all dying to see the dress!'”

In WASHINGTON they’re getting all philosophical… “Fate is archaic. We read about it in Greek mythology or Shakespeare. In the modern, meritocratic world, we are used to people earning their power or their celebrity, one way or another. But Prince William is one of the few remaining people on Earth to have been born into real political authority. He will someday become head of a relatively important state. And even if he wants to live a completely different life, he can’t. Were he to abdicate, like his great-great-uncle, that action would define him and haunt him until the end of his days. In this sense, he really is different from most of us. None of us knows exactly how our lives will turn out, but William has a better idea than most — and now Kate does, too.”

Hang on! What do you mean "a RELATIVELY important state"?!! Cheeky blighters.

In DEHLI they’re focusing on the charitable donations that the Prince and Catherine will make from their wedding gift list… “The second-in-line to the throne and his fiancee have asked anyone wanting to give them a present to pay into a fund to support 26 charities, many of which are not particularly well known. Aid for earthquake victims in Christchurch, New Zealand and the Canadian Coast Guard Auxiliary and Australia's Royal Flying Doctor Service are also on the list of beneficiaries.”

In ROME they’ve noticed that neither Tony Blair nor Gordon Brown have been invited!

In PARIS they’re worried about the money side of things.

In BOSTON they’re sizing up the odds: “Britons have been swapping bets on royal foibles for decades — many gambled on the name Diana would choose for her eldest son — but recent years have seen an expansion in the scope of the bets offered by mainstream bookmakers.

William Hill has bets out on whether Middleton will get a kiss on the cheek or on the lips when the couple appear at the Buckingham Palace balcony, whether her father will cry as he walks her down the aisle, and whether Prince Harry will catch her bouquet. Among the less likely bets: That the happy couple car’s will break down outside Westminster Abbey, that Middleton will jilt William at altar, or that Prince Harry will be too drunk to finish his speech.”

Meanwhile in LOS ANGELES they’re looking back at a very different Royal Wedding: “Capitalizing on the fever surrounding the royals, at least two new books on Wallis Simpson are due out this year, promising a fresh look at the woman who cost a country its king. The BBC broadcast a radio play about her in December. And even Madonna is getting in on the act, directing the upcoming film "W.E.," whose main character is obsessed with the scandalous relationship between Edward and Simpson.”


The Royal Wedding: It’s a London Thing – but the world is watching too.