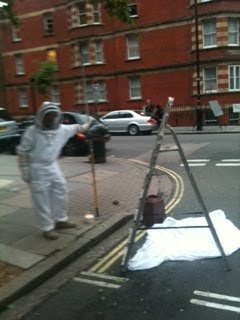 Eagle Eye David's been out and about with his smartphone again…

"Half way between Baker Street and Marylebone stations. Bee swarm in a forlorn little urban tree. It'll have a tale to tell its cockney tree grandkids. Billy Bunter Beekeeper to the rescue.


D.C Editor Adam chimes in: “David dug his i-Phone out of the pocket and captured this in a second. If you’ve done the same – caught an eccentric sight/a lovely sunset/a weird sign, anything really – and would like to share your efforts, we’d love to see ‘em. All contributions by email to to the usual address please."