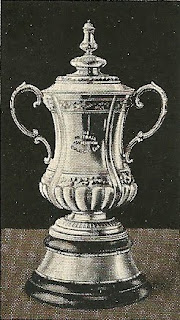 The world’s oldest knock-out football competition was established in London in 1871 at a meeting held at the offices of The Sportsman newspaper.

The competition is open to English teams big and small – from the mighty Chelsea to the humble Dulwich Hamlet. And it is traditional that the Third Round of the competition is the stage at which the Big Guns join in.

The Third Round is the BIG event – bigger for many even than the final. For some teams it IS the final.

The Third Round is when the big teams join the fray. The small teams have been battling away since the extra preliminary round way back in July and August. And in the Third Round they go into the hat with the big boys – no seeding, all equals.

The secret to the great romance of the F.A Cup is the tantalizing prospect of David versus Goliath encounters. And the Holy Grail of F.A Cup aficionados everywhere is… Giantkilling. In 1992 League Champions Arsenal fell foul of this phenomenon when defeated by lowly Wrexham, who had finished 91 places below the North London side in the League.

Back in 1871 only 15 teams took part and the first goal in the history of the competition was scored on 11th November 1871. Jarvis Kenrick was the scorer for London side Clapham Rovers.

The first winners were Wanderers – a London-based team comprised largely of old Harrovians – who defeated Royal Engineers 1-0 at The Oval in Kennington, South London.

London is the traditional home for the F.A Cup Final – Kennington, Crystal Palace, Stamford Bridge and Wembley Stadium have all hosted the climax to the competition. King George V became the first monarch to attend the Cup Final, in 1914 at Crystal Palace.

The first (and only) non-League team to win the competition was Tottenham Hotspur in 1901, of North London. Spurs are this year drawn against Cheltenham Town. The two clubs are separated by 66 places – and two divisions – in the League. Superstition has it that Tottenham Hotspur always do well in The Cup in years ending in 1…

The big London derby – a game between two London-based sides – in the Third Round is Fulham versus Charlton. Charlton last won The Cup in 1946. Fulham have yet to trouble the engravers when it comes to winning the trophy – but they did make a famous All London final in 1975 when they lost narrowly to the East End’s finest West Ham.