Adam writes… The graphic novel makes its debut on our London Reading List!

When talking to London Walkers out there on our walking tours, I am always pleased to get a recommendation for something new and London-flavoured to read. Over the years the title that has come up more often than any other has been The League of Extraordinary Gentlemen. 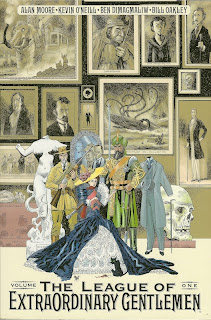 As a blend of fact and fiction, The League of Extraordinary Gentlemen would be fun enough. The added dimension of mingling fictional characters of the past with newly minted creations, however, creates a new level of fascination. The interweaving of adventure story and Alternate History adds further piquancy. The project’s crowning glory, however, is that it can blend these already tantalizing elements with a further cocktail all its own – that of words (By Alan Moore) and dazzlingly crafted visuals (courtesy of Kevin O’Neill).

“What makes a graphic novel different from a mere comic?” is the commonly asked question. Simply the richness, depth and multi-leveled approach as detailed above. If all this makes it sound heavy weather, lumpen with clod-hopping cross references and literary namedrops, then perhaps now is the time to point out that it’s also rattling good fun, fast paced and thoroughly exhilarating. The reader need not get a single one of the references either to 19th Century fiction or the history of the fin de siècle period in which the action is set. The narrative itself is enough to awaken the swashbuckler in even the most jaded reader.

Our heroes – the League of the title (including one Extraordinary woman) – are characters from 19th century adventure fiction. Mina Murray (Dracula’s Mina Harker reverted to her maiden name), Alan Quartermain (of King Solomon’s Mines fame), Captain Nemo (from Jules Verne’s 20,000 Leagues Under the Sea), Doctor Jekyll (and therefore Mr Hyde from the imagination of R.L Stevenson) and Hawley Griffin (AKA Wells’s The Invisible Man).

The members are recruited by Campion Bond (an original character to the novel, but the grandfather of James Bond) of British Intelligence to help save the British Empire from the combined evils of Fu Manchu and Professor Moriarty.

London as a backdrop is lovingly detailed. The League hole-up at The British Museum; Limehouse is home to the evil Fu Manchu’s lair; the doss house that Quartermain and Murray investigate has separate entrances for men and women – exactly like the one that can still be seen on our Jack The Ripper walk.

Such attention to detail elevates this work to a level way above my preconceptions of the graphic novel – and in finally reading it I have learned what millions of graphic novel aficionados have known for years. This is so much more than a comic.

Email ThisBlogThis!Share to TwitterShare to FacebookShare to Pinterest
Labels: London books, The League Of Extraordinary Gentlemen