Plaque of the Week No.101: The Roundhouse 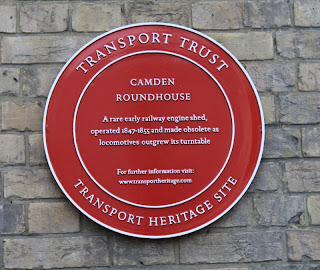 The plaque on The Roundhouse at Chalk Farm reminds us of the original purpose of the building that is now a Grade II* Listed structure. But it is not as a railway shed that this building has become a London legend.

As a theatre in the 1960s it played home to the famously controversial revue Oh! Calcutta! as well as Hamlet – directed by Tony Richardson and starring Nicol Williamson and Marianne Faithfull.

Ms Faithfull’s 60’s beau Mick Jagger performed here with The Rolling Stones. The Doors played a legendary show here in 1968. Bowie, Led Zeppelin, Hendrix and The Ramones all graced the space with their varied talents.

Currently thriving again as a live venue after years of uncertainly, this beloved London performance space will play home to CircusFest later this year, a feast of contemporary circus. The Roundhouse website is HERE.