Plaque of the Week No.107: The Second Lord's 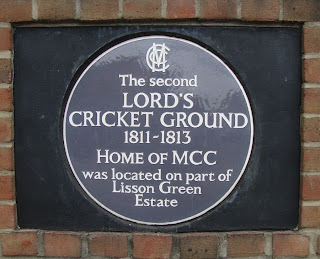 The second location – or The Middle Ground as aficionados have it – was situated some 250 yards to the southeast of the current Lord’s. Lord's moved to make way for the Regent's Canal. The plaque is on Park Road.

Lovers of the game will have to make do with the meagre spectacle of The Olympic Games this year as the next Ashes series is not due to take place until 2013. Lord’s will host the opening match.

Email ThisBlogThis!Share to TwitterShare to FacebookShare to Pinterest
Labels: Lord's