Question from a London Walker just the other day: what’s the difference between Tottenham and Tottenham Court Road (apart from the geographic difference of about six miles)? Are they the same in terms of historic land ownership?

During the reign of King Henry III, the land to the northwest of what is now Centre Point belonged to one William de Tottenhall. When the same estate came into the possession of Queen Elizabeth I, the “Court” bit was added and the name evolves into the modern-day Tottenham Court Road.

The north London neighbourhood of Tottenham, on the other hand, is believed to have been named for a fellow by the name o’ Tota, a farmer whose hamlet is listed in the Domesday Book.

We are loving this month’s Mojo magazine. 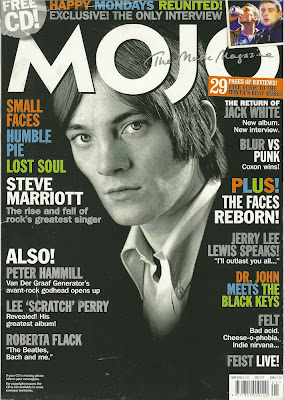 The big feature is an overview of the career of Steve Marriott, one of the East End’s finest sons. The piece, by Mark Paytress, follows Marriott from his Small Faces days in the 60s, through the American success of the heavier Humble Pie, as well as charting the spartan solo years and the untimely death of this major talent. It is a lovingly detailed and compelling piece of rock’n’roll journalism.

The cover shot is great, too: Marriott in all his Mod pomp.

Paytress also makes reference to the young Marriott’s time in Lionel Bart’s musical Oliver! as a child actor here in the West End of London – at what was then the New Theatre on St Martin’s Lane (now the Noel Coward Theatre).

Oliver! is a musical with a great many rock’n’roll connections. Its composer, Lionel Bart, wrote hits for Tommy Steele, England’s answer to Elvis in the 50s. Future Genesis drummer Phil Collins played the role of The Artful Dodger – though not in the original production as featured on the cast album. (Collins also claims to have been an extra in A Hard Day’s Night.) When Oliver! transferred to Broadway, the late Davy Jones, in his pre-Monkees days (or pre-Pre-Fab Four days, one could say) took the role of Dodger – the cast of this Broadway production also featured on the same Ed Sullivan show that introduced The Beatles to America.


There are some superb Marriott Extras – including some Oliver! stuff – at the Mojo website. CLICK HERE to enjoy.

Our Favourite Shops No.8 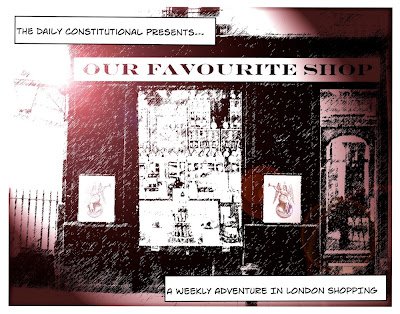 Every Thursday we bring you The Daily Constitutional guide to the best of London shopping – independent, one man- and one-woman bands, unique boutiques, singular emporia and London institutions. 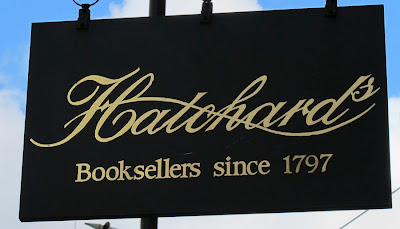 Why: Nominated by London Walker Celia Cygnar of Chicago IL, who writes:

“Hatchards. Best book store in London – maybe in the world! I always try to make this a MUST SEE on my trips to Londontown.”


We at the DC find it tough to disagree. Founded in 1797 it is the oldest bookshop in London.

We were lucky enough to have a brush with a little flake of that history about a year ago when we stumbled upon an old invoice from Hatchards in a copy of a secondhand book – read the story HERE.

Keep in touch with events at Hatchards, including their famous signings, by signing up for the newsletter at www.hatchards.co.uk

London's newest - and tallest - skyscraper, The Shard, going up on the Southwark side of London Bridge, will top out at 1,017 ft.

Well, maybe think of the London "skyscraper" of its era, Centrepoint built in 1966. It's 384 ft. high. Basically that's the 100 yard long American football field stood on end and topped up with the two end zones. (And what helps to get London's 21st century architectural Sequoias into perspective is to bear in mind that Centre Point is only 19 ft. taller than what must have seemed like the eternally [well, 250 years] reigning champ, St Paul's Cathedral.)

The Shard in short - "short"? - is about three times as tall as Centrepoint.

Or you want that horizontally, well, were The Shard felled like a Sequoia, walking the length of it would be like getting off at Tottenham Court Road Tube Station and walking down Charing Cross Road to Cambridge Circus to go to the Palace Theatre to see Singin' in the Rain.

Anyway, were you to bore a 1017 ft. deep well at Tottenham Court Road Station - a well deep enough, in other words, to sink every last inch of The Shard into it - that would get you almost down - to within about 100 ft. - of the well they actually did bore there, beneath Meux's Horseshoe Brewery as it then was, in 1877.

And how deep was that well? In another sense, I mean - not just the deep as the "inverted Shard and then some" sense.

It's several hundred million years deep, that's how deep it is. That 1146 ft. deep well they bored in 1877 went down through millions of years of London history. It bottomed out at what geologists call the Devonian rocks of the Palaeozoic platform.

So there's some hard rock indeed for you to roll about in your mind while you're waiting for Adam or Richard to get their Rock 'n' Roll London Walk rockin', of a Friday afternoon, from right there, Tottenham Court Road Tube Station.

Email ThisBlogThis!Share to TwitterShare to FacebookShare to Pinterest
Labels: The Shard 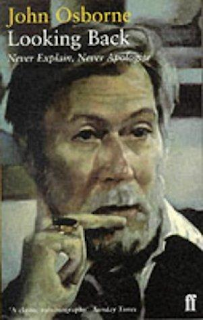 The first of two more theatre books for our list. The subjects of both were theatrical colossi in their day, admired, feared even, one as a great critic, the other as both critic and revolutionary. But in recent years both seem to have faded from view a little as the theatrical establishment busies itself reassessing the reputations of the old theatre that the 50s revolution had once seemed to have obliterated.

John Osborne’s Look Back In Anger (1956) is for many still a milestone in English theatre. The revolution was not televised after all. But it was staged – at the Royal Court Theatre in Sloane Square.

The protagonist, Jimmy Porter, is the first of the so-called Angry Young Men. His personal rage at lacklustre, post-war England, and his apathetic countrymen forms a vicious critique of a nation recovering from the loss of empire.

His rage is the rage of Osborne himself.

Osborne’s two volumes of autobiography, A Better Class of Person and Almost a Gentleman are now published in the compendium edition Looking back: Never Explain, Never Apologise. Not for the faint-hearted, these lacerating accounts of his theatrical life are a million miles away from the cosy biographical luvvie-ins of yore. Difficult for some to palate, but entirely appropriate in the light of his incendiary work for the stage.

Kenneth Tynan wrote in his review of Osborne’s groundbreaking 1956 debut “I doubt if I could love anyone who did not wish to see Look Back in Anger”. And although for many in the theatre Osborne himself may have been a difficult man to love, his work casts a long shadow over the British stage of the last 50 years.

We’ll deal with Kenneth Tynan in this slot next week. 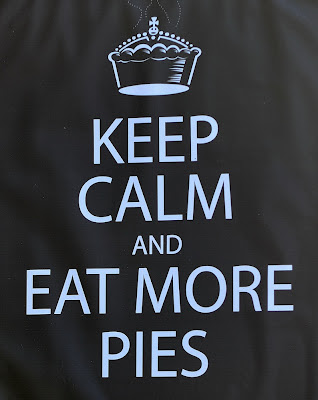 Bit of fun – bit of all right – this. Came across the More Pies sign outside a Bloomsbury pub. The thought instanta was: "that's nice, that's satisfying". (The way a whiff from the kitchen of a freshly baked pie is entirely agreeable.) And upswung the camera.

And just to reflect for a second on why it was satisfying. Well, I suppose the "subtext" thought was: "ah, yes, there it is – the great British cultural coral reef alive and well and, well, 'carrying on'. It just keeps on being added to. It grounds, it's solid, it's familiar, it's home, it provides a sense of continuity and belonging.

In this instance the original "polyp" was the famous World War II propaganda poster. Which was all about the Brits' sense of themselves: doughty, phlegmatic, determined, True Grit Brits.

But I think there's another "touch" to the reef architecture here. Another connection. Another polyp. Surely, one also hears the most famous moment in Dickens: Oliver Twist, in the workhouse, asking for more gruel: "Please, Sir, I want some more."

In and Around London... Did You Put Your Clocks Forward?

Well? Did you put your clocks forward? And can you name our London timepieces? Or is the one at the bottom too tricky? (!) 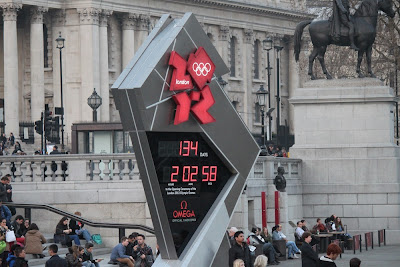 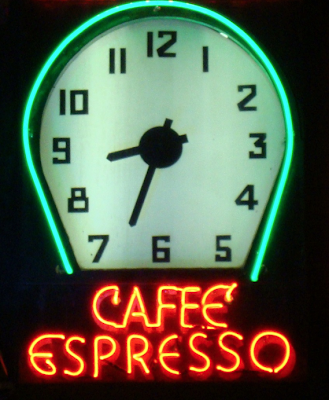 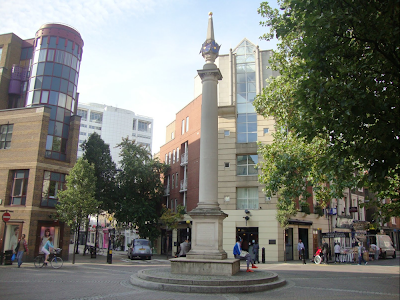 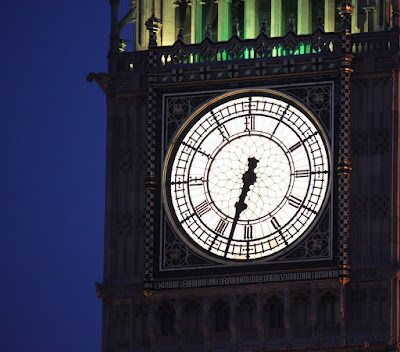