The Lyceum Theatre today is home to The Lion King – a musical written by old rockers Tim Rice (co-founder of the indispensible Guinness Book of British Hit Singles) and Elton John.

But it also retains a special place in the hearts of rock’n’roll Londoners – as the Lyceum Ballroom such legendary names as Led Zeppelin, The Who, Queen, The Clash, U2 and The Smiths played here. It is of particular importance to fans of Bob Marley.

In 1975 Bob Marley and the Wailers (in a new incarnation, the originals having split in ’74) recorded their Live! album at the Lyceum. The album dates from the period when Marley first became an international star following his breakthrough hit No Woman, No Cry (from the Natty Dread album, 1975) 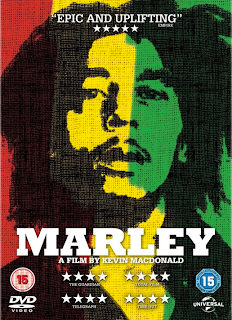 Kevin McDonald’s documentary on the life and work of the Jamaican legend – titled simply Marley – was released on DVD last week (pictured above). You can buy it at Fopp London, 1 Earlham Street WC2 (along the route of the Rock’n’Roll London Walk)