The Last Word On The Moorgate Dragon!

A FEW WEEKS AGO WE POSTED THE TALE OF THE "MISSING" MOORGATE DRAGON. IT STARTED LIKE THIS…

One of our dragons is missing!

Silver in colour, answers to the name of Moorgate. Last seen facing toward the borough of Islington and carrying a shield with a red cross on a white background. 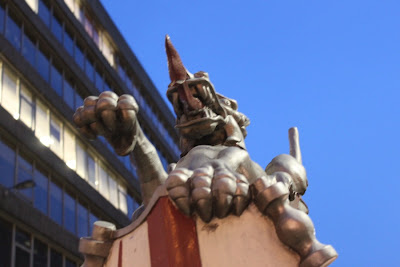 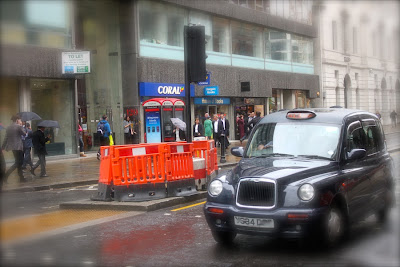 We do not wish to alarm you. He has probably just gone off on holiday – perhaps to visit with one of the other City dragons. Or maybe to Magaluf – the weather here in London has been shocking, after all. Does he have tickets for the Men’s singles final at Wimbledon? Or he’s off accompanying the Olympic Torch around the UK and is standing by to breathe on it should it get snuffed out on its journey to London.

We have contacted the authorities. There is no need for alarm.

But be vigilant. Keep an eye on the other dragons that guard the boundaries of The City of London – at Fleet Street, Victoria Embankment (2), Aldersgate, Aldgate, Bishopsgate, Blackfrairs Bridge, Farringdon, Holborn (2) and London Bridge (2) and report any suspicious movements to us at the usual email address.

If you see Moorgate, or know of his whereabouts, do drop us a line.

WELL, BOB BROUGHTON AT THE CITY OF LONDON TOOK US AT OUR WORD, AND DID INDEED DROP US A LINE…

“Our Dragon has unfortunately had to be removed to enable the Crossrail works to be carried out as the trenches would be going too close to the plinth.

It was decided to remove it and store the Dragon with our specialist contractor until it is safe to do so.


WE AT THE D.C THEN POSED THE BURNING QUESTION:

We imagine that such questions would sorely test the patience of the (obviously very busy) City Highways Department, so we will spare Mr Broughton any further inconvenience and wait until the dragon comes home to Moorgate and ask him in person. Get it straight from the horse’s mouth, if you will.

Thanks go to all Daily Constitutionalists who expressed their concern – but thanks most of all to the folks at the City of London for being such good sports in answering our query.

And thanks for taking such great care of our Dragons!


WHICH ELICITED THIS RESPONSE FROM RUPERT HARRIS CONSERVATION…

Just to let you know that we are currently restoring the Moorgate dragon for the City of London and he will return to his former spot in due course, though I believe the exact date for his return will depend on Crossrail works.

We also recently completed the conservation and reinstatement of the 19th-century dragons on Victoria Embankment.

On behalf of the City of London we care for most of the City’s public statuary and plaques, drinking fountains etc.

Thank you for your vigilance!

GOOD TO KNOW OUR MOORGATE DRAGON IS IN GOOD HANDS. IT IS A PITY THAT HE MISSED THE OLYMPICS, THOUGH. HAVING SAID THAT, WE'RE SURE THAT THE GOOD FOLKS AT RUPERT HARRIS ALLOWED HIM TO WATCH IT ON THE TELLY.

THANKS TO EVERYONE WHO JOINED IN WITH OUR TALE!