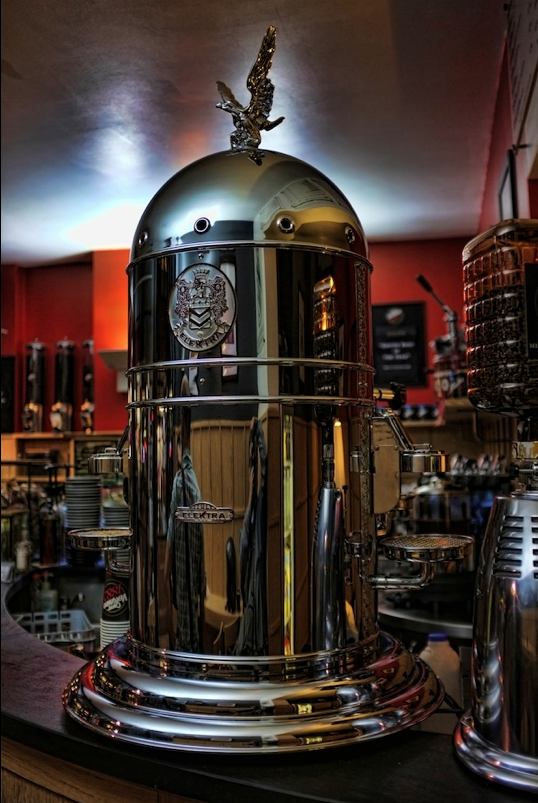 Miles gets magicked to the year 2173, where an Orgasmatron is just part of the furniture. Every late 22nd century house comes with one. “(So to speak.) All mod cons”, you know. And you thought your i-Phone was pretty special. (In real life the O-tron was a lift that had been given quite a special, er, facelift. And like its real life antecedent the Orgasmatron elevated. In a manner of speaking.)

Well, David’s Orgasmatron is in a very special coffee shop on Charing Cross Road. Like Miles, David can often be discovered there. And, also like Miles, easily captured (in the film, you’ll recall, the state security apparatus are hot on the trail of Miles, who, in their infinite wisdom, they’ve deemed a subversive).

David can be discovered there. And easily captured. Because he’s in a daze, sheepish smile on his face, staring gormlessly – love-struck – at the O-tron. Desperate to hug it. Or at least caress it.

Because it makes the best coffee in the world.

And it’s not just beauty in the eye of the beholder. Which is by way of saying, David’s in pretty good company. The Times’ Food Critic says this little coffee shop is the only “comestibles” (my word, not his) joint (also my word) in the world he can’t walk by without going in. He finds himself on that stretch of pavement he has to go in and order. Every single time.

And that’s just the coffee.

The drinking chocolate makes the stuff Mum served – as good as it was – seem like mulched and lightly sugared cardboard.

(London Walks connection? Well, ask the guides on the Eccentric London walk on Friday. Or Adam on his Seven Dials – the Slum of Slums occasional.)

Caffe Vernanno 1822 is on the Charing Cross Road.

Email ThisBlogThis!Share to TwitterShare to FacebookShare to Pinterest
Labels: Best Coffee In London