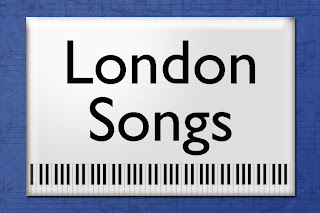 
As usual, we want to hear from you. What are your favourite London songs? Anything goes, from a tune mentioning a London location, to a piece of music composed here, if it has a strong London connection or theme, we'll add it to the list. Email us at the usual address, message us on Twitter @londonwalks or leave a comment below…

For London songs I always think of "I'm forever blowing bubbles" which is a bit odd as it doesn't mention London and I'm not even a West Ham fan!  However, it is so intrinsically linked with the Club which has produced such icons of English football such as Bobby Moore & Geoff Hurst & Michael Carrick (now I've given away who I do support) that it has to be included as a London song.

It even got a line in the Olympics Opening Ceremony and the Stadium is going to the Hammers so come and see it and give us a chorus on the Olympics Walk which goes on Thursdays at 2.15pm from West Ham Tube.

Adam adds… A good choice, this. A London folk song if ever there was one, although, as Kim points out, it has no specific London references, its association with West Ham United F.C cements it firmly in the East End. It goes like this…

I’m particularly fond of the line “Fortune’s always hiding” – which would seem to typify the West Ham experience. This great club – formed out of an iron works workers’ side in the 19th Century – has won the F.A Cup on three occasions, but the fortune of the League Championship has proved elusive indeed thus far.

I’m Forever Blowing Bubbles is a relic of the old custom of community singing at football matches – formal, organized singalongs before kick off. The fingerprints of this era can still be seen right across the land. At Birmingham City, for example, the fans sing Harry Lauder’s Keep Right On To The End Of The Road; at Bristol Rovers the old Leadbelly tune Goodnight Irene is the favourite.

West Ham’s love of I’m Forever Blowing Bubbles dates back to the 1920s. The song was first used in the world of sport in the country of its origin – the United States. It was the big hit of the The Passing Show of 1918 on Broadway. And just a year later, during the World Series scandal of 1919, the so-called Black Sox affair, it was pressed into service with its lyric amended for satirical purposes to “I’m forever blowing ballgames”.

In 1980 the punk band Cockney Rejects recorded a version. It reached No.35 in the UK charts in the year that West Ham last won the F.A Cup. And here they are, one minute thirty-nine seconds of mayhem…

Kim
Kim, who has worked in the House of Commons and the European Parliament, is another 24-carat Blue Badge Guide: she won the London Tourist Board's Guide of the Year award in 2001.