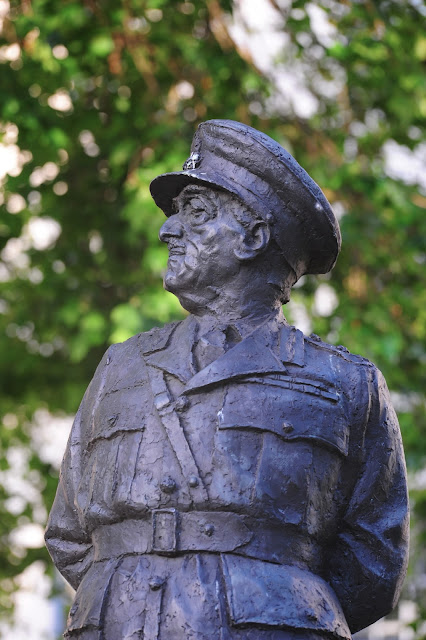 
Where you going? What's the hurry?

Last thing you should do is sail right by him, pay him no regard.

No man in uniform did more to bring about the Allied victory. Indeed, his story is the story of the war.

Meet Brookie. The best soldier of them all.

Take another look at the statue.

Yes, he was in the Royal Horse Artillery. Indeed, he produced, at the Somme in 1916, the British Army's first ever "creeping barrage."

In 1940 he commanded II Corps of the BEF in France. When the German "sickle cut" came he saved his army by executing "a series of hazardous manoeuvres of great ingenuity and boldness." Brooke's extricating his army from their exposed and untenable position was the necessary prelude to the Dunkirk miracle.

When he became CIGS - and principal military advisor to the government - he stuck to his guns. Winston Churchill often wanted to hear something more palatable. Brooke was the only person who was able to stand up to him, who always told the old man the truth.

Brooke called Churchill "the most difficult man to work with I have ever struck, but I should not have missed the chance of working with him for anything on earth."

To the Americans Brooke was the most intransigent Brit of them all.

Brooke stands there, on Whitehall, flanked by Generals Montgomery and Slim, two of his protégés, representing, respectively, the European and Far East "theatres".

They're lined up there. Not unlike the row Brooke, together with Churchill, Monty, U.S. Lt. General W. H. Simpson and their staffs made at the Rhine on March 3, 1945 while treating themselves to a mass urination on the Siegfried Line.

And for a final salvo in this guide's creeping barrage, how about this? Take another look at Brookie and think of him in Normandy on June 12, 1944, making up part of history's greatest ever "opportunity target". Brooke, Churchill, Montgomery, U.S. Army Chief of Staff General George C. Marshall, U.S Fleet Commander Admiral Ernest King, General 'Hap' Arnold (Commanding General of the U.S. Air Force), and South African premier (and Field Marshal of the British Army) Jan Smuts were having lunch, utterly unaware of the two German soldiers who were hiding nearby. Mein Gott, what a decapitation that would have been. Fortunately the enemy soldiers were waiting for an opportunity to surrender.

And on that note, at ease. Or walk on by if you please.