One Of Our Plaques Is Missing…

As I blog this, the name of John Markham does not appear anywhere in the civic landscape of Crystal Palace and surrounding environs.

Yet he was a local hero in Crystal Palace, and his legend was once preserved on a plaque at the Paxton Arms Pub.

Out on one of my wanders last week I was saddened to see that the pub is closed and is being converted into flats.

Worse yet, the plaque had vanished. 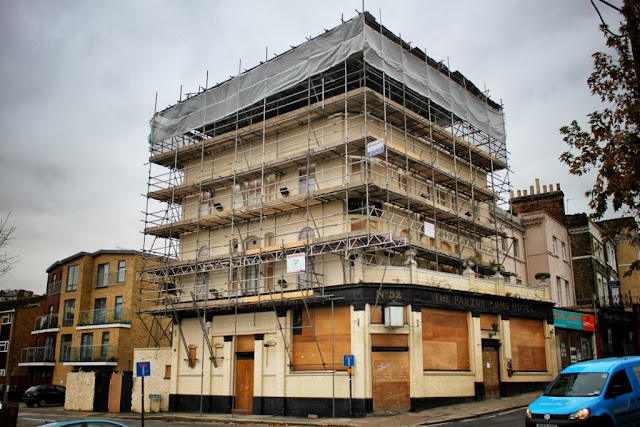 A pity, as it told the tale of a summer’s night in 1944 when a V1 rocket interrupted Mr Markham’s quiet pint.

Mr Markham, one of the countless unsung war heroes, helped to dig out survivors. But only, according to local legend, after he’d taken a moment to finish his pint first.

The damage to the pub was, of course, extensive and the refurbished hostelry didn’t re-open its doors until the 28th December 1955 – 11 years, one new monarch and three Prime Ministers later. The brewery took care to ensure that John Markham was the recipient of the first pint to be pulled in the new boozer. I like to picture him crooking his arm, holding his ale aloft and murmuring, “Now where was I before I was so rudely interrupted.”

I truly hope the developers will re-instate his plaque when the conversion work is finished.