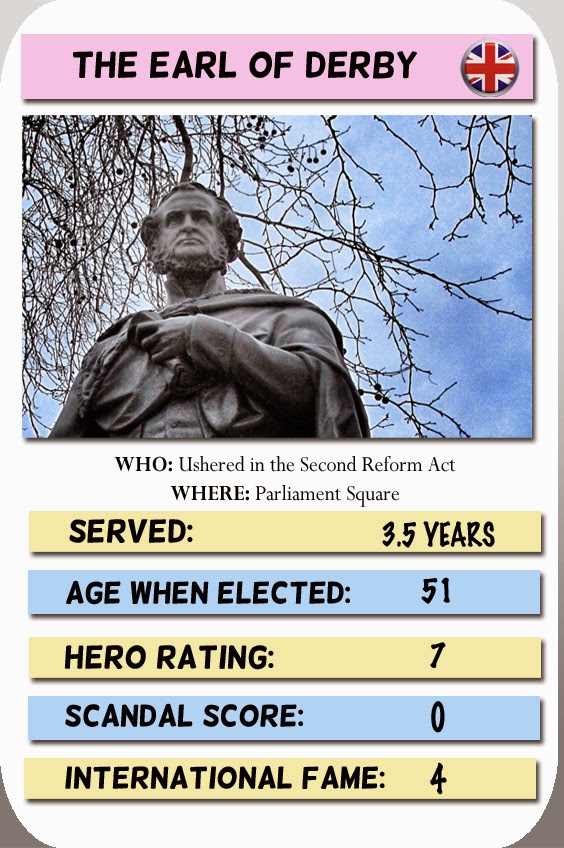 Father of the modern Conservative Party and served as PM three times. 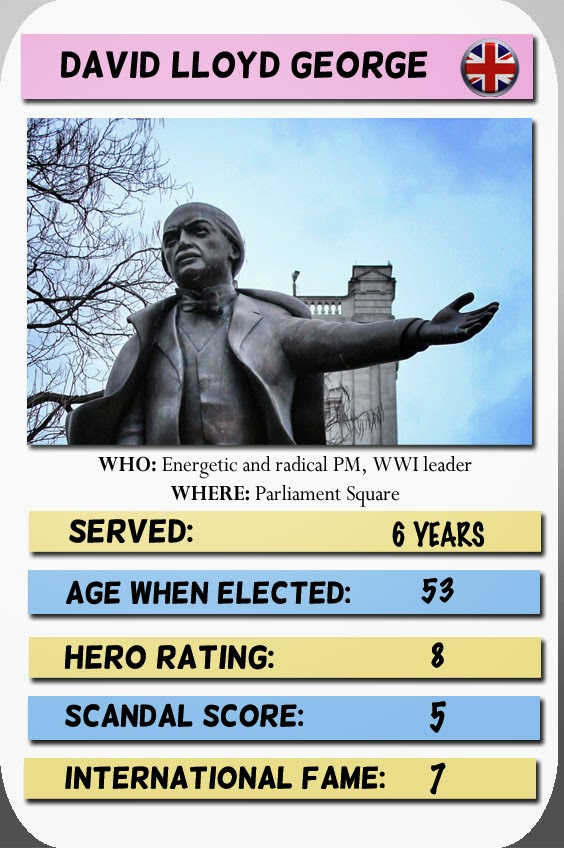 The only solicitor and the only Welshman ever to be Prime Minister.

To tie-in with this month’s blog & podcast theme of Political London, we have a three copies of The Dictionary of Labour Quotations to give away in our competition.

Published by Biteback at £12:99 The Dictionary of Labour Quotations by Stuart Thomson features the words of Marx, Miliband, Attlee and Aristotle standing side by side in one handy volume, jostling for position with not only Brown, Blair and Balls but also Rousseau, Robespierre and Russell. Phew!

The Dictionary of Labour Quotations brings together insights, remarks, retorts, wit and wisdom, making it essential reading for everyone with a passion for British politics. It is compiled public affairs and communications consultant Stuart Thomson. 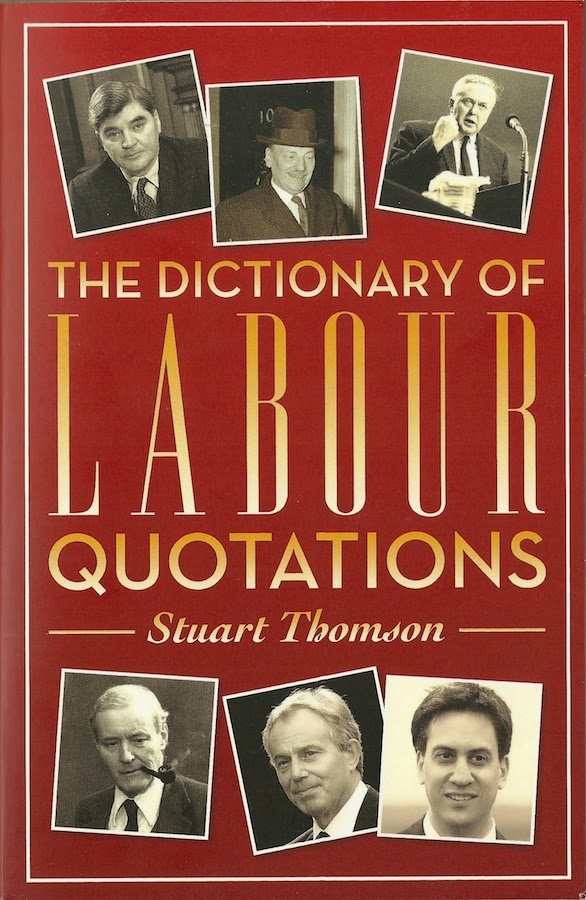 To win a copy, simply answer the following question:

In a speech relating to multiculturalism, which politician said…

Chicken Tikka Massala is now a true British national dish, not only because it is the most popular, but because it is a perfect illustration of the way Britain absorbs and adapts external influences.

Your answer (by midnight on March 31st 2014) should be sent to OUR USUAL COMPETITION EMAIL ADDRESS.

Three winners will be drawn at random and informed via email. The editor's decision is final.

You can visit the Biteback Publishing website at www.bitebackpublishing.com/

Email ThisBlogThis!Share to TwitterShare to FacebookShare to Pinterest
Labels: The Dictionary of Labour Quotations

In and Around London... The O2 & The Emirates Airline 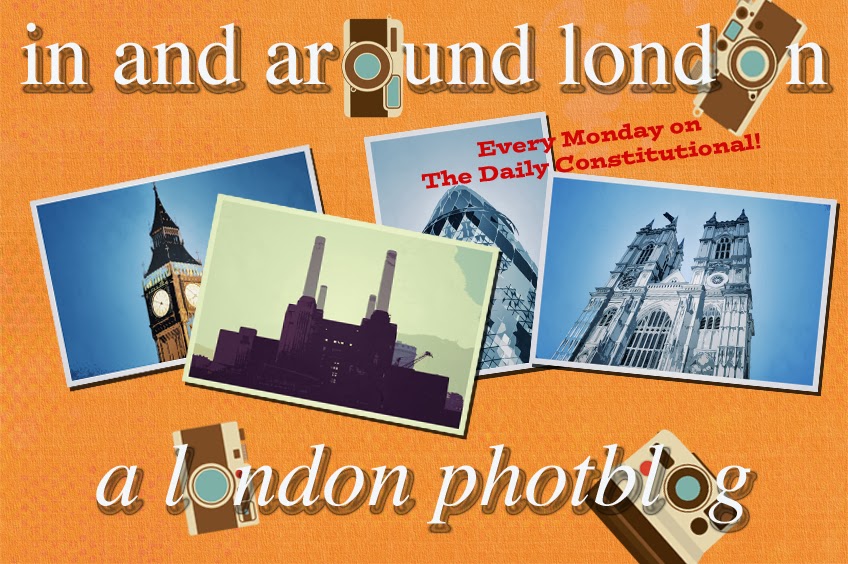 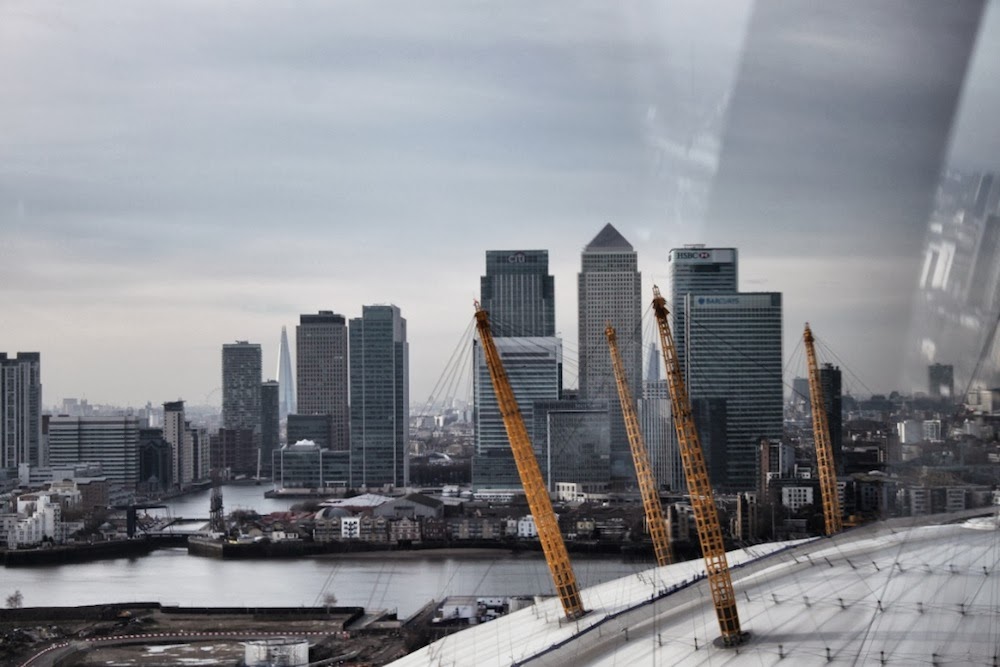 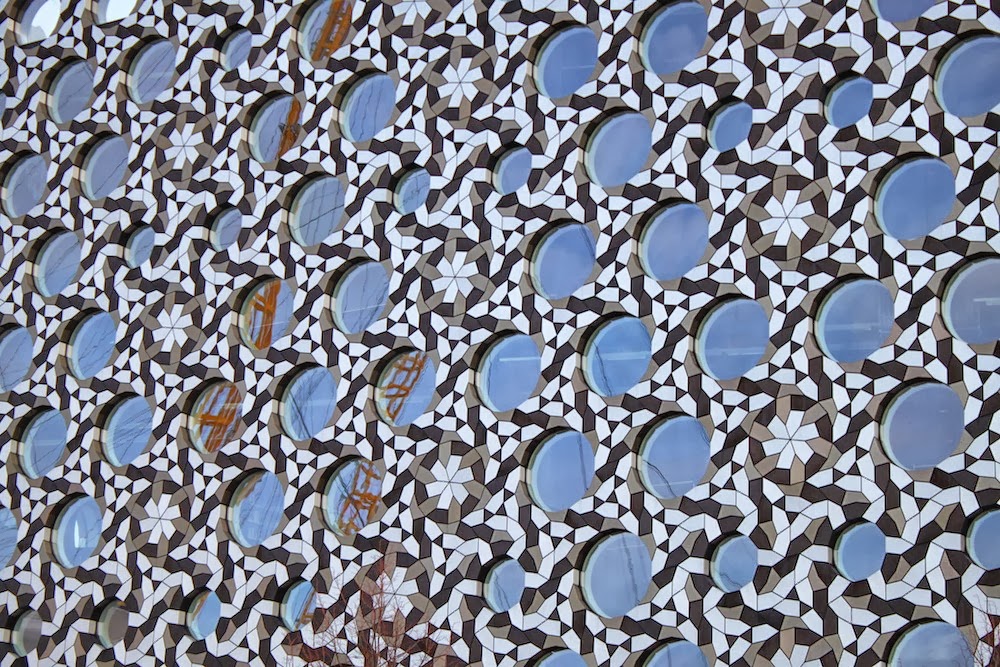 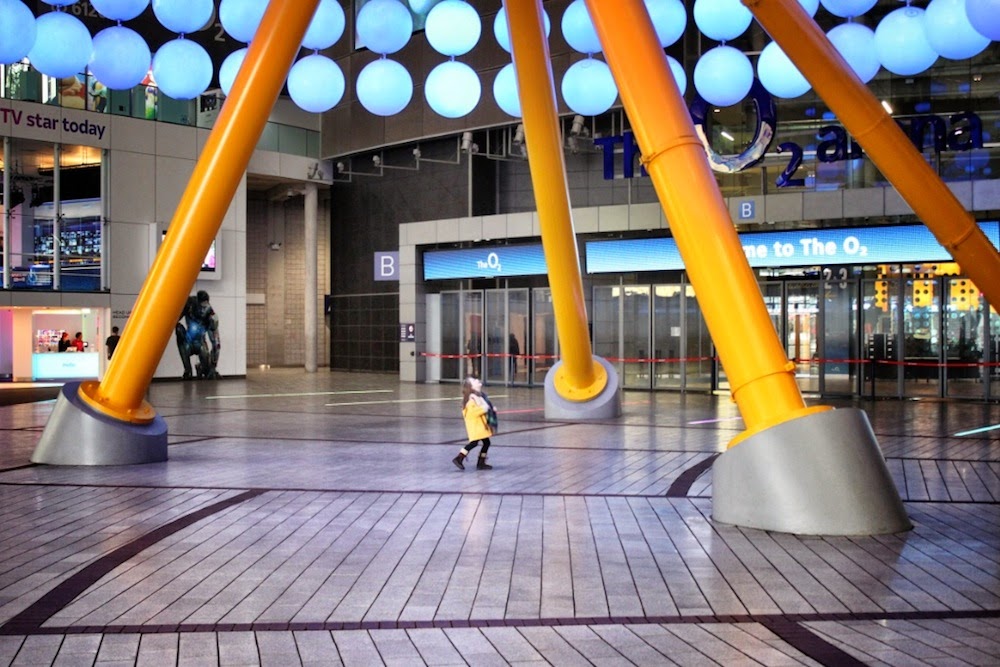 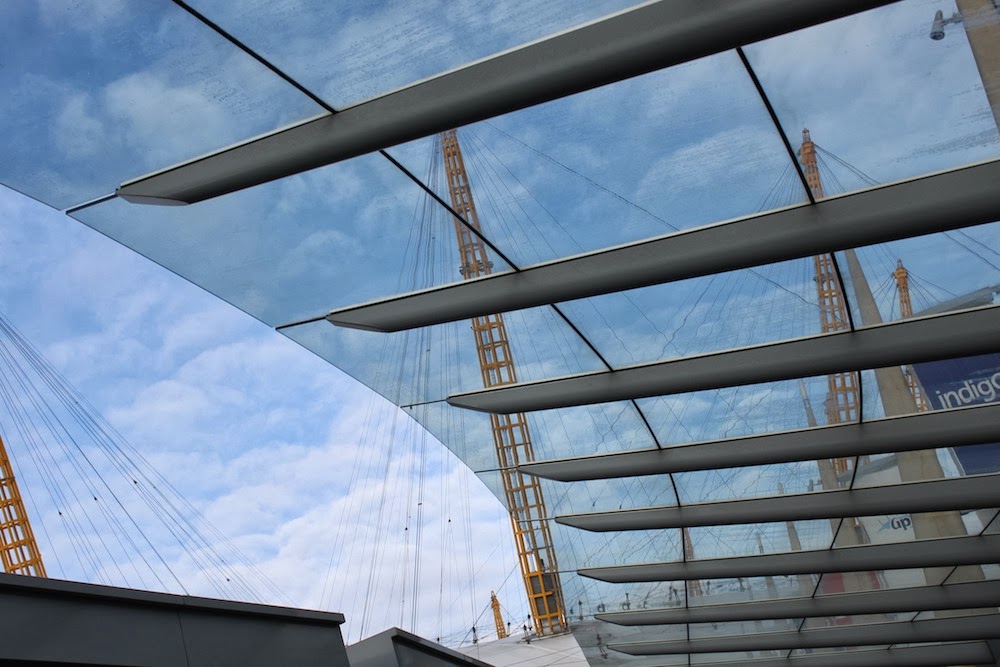 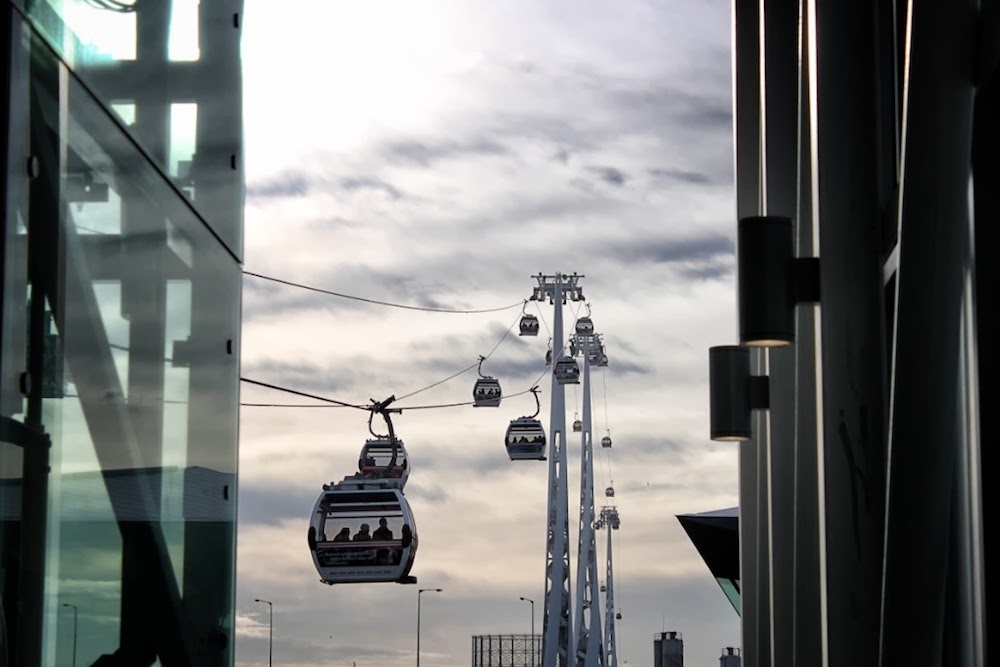 
THE LURE OF THE UNDERGROUND

This one's got three subtitles. And a footnote. The four of them sum up the walk perfectly. They are: Down the Tubes. 150 Years of Engineering & Artistry. Seen from the Inside. We're going places on this walk so you'll need an Oyster Card or a 2-Zone Travel Card (that's the footnote). Now a bit more background info. This year is the London Underground's 150th birthday. This tour explores that extraordinary "journey", "trajectory", "trip", call it what you will. Much of the tour is down inside the tube. But not all of it. We explore several stations, inside and out. You'll see things that you won't have seen before. Let alone things that you did see before but didn't "see", if you know what, I mean. I (David) went on this one with Fiona in February. It was a revelation. I've been taking the Tube for 40 years. She pointed things that I'd never noticed – never noticed in stations that I've been in well over 10,000 times. Lots and lots of "well, I never" moments, jaw hanging open moments. The Tube. It's a great London story. An integral part of the calculus of London life. So that in itself is a great foundation for a walk. And to it you can add a great guide, Fiona. She's put this together brilliantly. And delivers it with consummate artistry. This is a very special couple of hours. Strongly recommended.

Mary (“Poppins”) is “practically perfect”. A classically trained dancer and an actress (West End credits include Gone with the Wind, a long stint at the Royal National Theatre and Noises Off), she’s a trapeze artiste, an award-­winning, professionally qualified Blue Badge and City of London Guide – and the boss.

That’s the graf – the little capsule “bio” – about her on the London Walks Guides page.

And no, I’m not sucking up. It’s David writing this. Mary’s my English rose, my wife.

When we travel with friends we all call her Scout. Because she’s up on the point. Takes the lead. Figures out the best way to get there. She’s one of life’s map readers. One of the world’s great organisers – figure-­er outers, problem solvers.

Now if that were my bent too this marriage would have been on the rocks before it got out of the driveway. But it’s not. That’s the joy of it. (Well, one of the joys.)

I’m not practical. I’m Buddha-­happy having somebody else take care of all that stuff. I just want to read, explore my mistress (fuhgeddit this isn’t some sort of Oprah – or God forbid, Jerry Springer – confession; which is by way of saying, my mistress is London), wind my kids up, Pip and Pocket around with pals, day dream, do what I want to do when I want to do it, flit and sip, busy myself with my latest “thing” (of late it’s sticking banderillas into the Jack Daniels poster advertising campaign down the Tube [if only it were]) – well, you get the idea.

So to have Scout on the point – making all that possible – well, the question isn’t, “who’s your daddy?” it’s “who’s a very very lucky boy?”

And who’s a very very lucky cohort of London Walkers and “interested parties” who avail themselves of what London Walks does. Does in non pareil fashion.

This is a young lady who knows her London. Nth degree doesn’t do it justice. Mary’s operating in some quantum physics realm that’s way beyond “Nth degree”. The classic example – friends and family are hugely fond of this (and not a little in awe of it) – there’s about 275 stations on the London Underground – you could lead “the boss” aka Scout into just about any of them and she’ll know where to stand on the platform so the “connection” (whatever it is, changing, e.g. at Baker Street from the Jubilee Line to the Bakerloo Line) is made in the most optimally efficient manner possible.

Takes all the worry – all the bother, all the stumbling around – out of it.

And London Walks implications? Well, I’ve just come upstairs to write this. Come upstairs from hearing her on the phone to someone who’d booked a private walk and was worried about whether it could be made to dovetail with catching the Guard Change.

Mary: “There are several possibilities. Two of them work very well. The other two are more problematic. If you have to start the walk at [whatever time] your best bet would be to go for the end of the Guard Change. You see just as much. It’s every bit as impressive – in fact you’ll be able to get closer – Ann will take you to the very best viewing spot and the whole thing will work a treat.”

And I’m thinking, “that’s a foreign visitor on the other end of that line – I hope they know – I’m sure they must do – how lucky they are to have Mary on the end of the line, to be able to draw on her incomparable knowledge, sureness of touch, second-­‐to-­‐none judgement, and just general ‘big picture’ grasp of how to do it best.

To have her solving their problems for them.

Have Scout, Will Travel (to London) reads the card of an army of London Walkers.