Streets Ahead: Good 'Ole Boys, Your Goose is Cooked

“This is a London Particular. A fog Miss” (Charles Dickens).

That was then. We don’t have fogs in London anymore. Or do we? Aren’t we groping around in a fog of advertising? 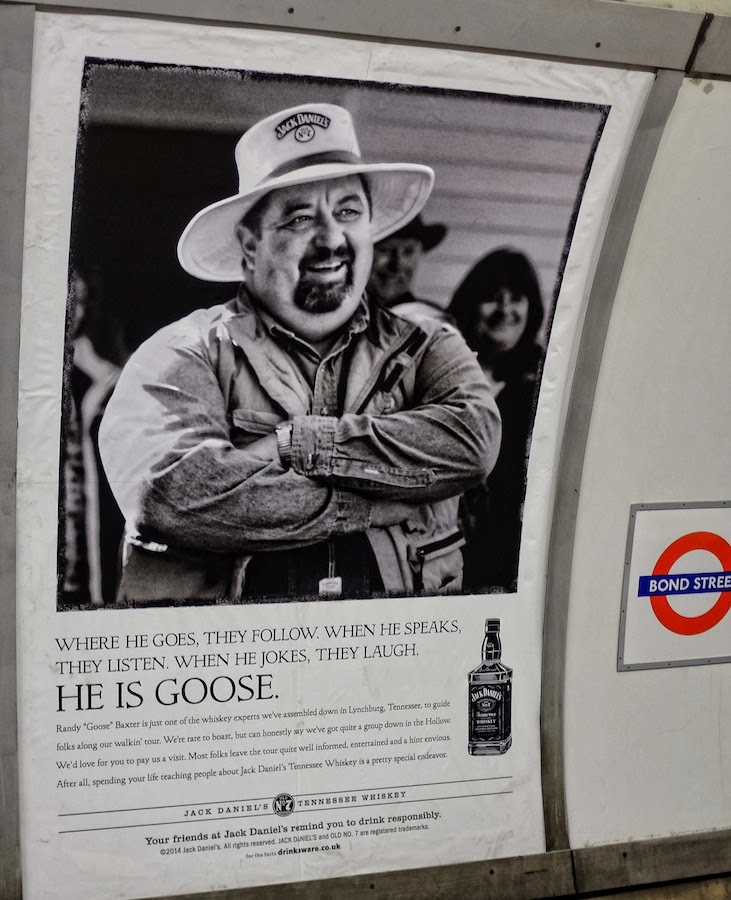 No question about it, what caught my eye was that “Goose” is a guide.

Or to get right down to it, the faux folksiness of the thing. Especially the phrasing.

You know: “to guide folks along our walkin’ tour.”

Only thing that’s missin’ is a y’all or two. And maybe a back forty.

Now don’t get me wrong. I don’t doubt that Goose is Goose. And I expect he dresses like that. And talks like he dresses. And is probably a damned good guide.

Pal sent me a funny the other dayabout getting a pill down a cat’s throat. As opposed to a dog’s.

Not swallowing it because I don’t want “the feeling” the pill’s designed to give me.

In this case, that Au. Then. Ticity. Glow. No thanks.

Nothing against Jack Daniels. I just don’t like being stitched up. As Keats put it, I don’t like poetry that’s got a palpable design on me.

This cat looks at a big ‘ole Tube poster like that and thinks, gosh, been seeing those Jack Daniels posters on the Tube for years. Wonder how much each one of those postings cost? It won’t come cheap, that’s for sure. And notice, they’re always in the prime position – somewhere near the middle of the platform (rather than at either end). And Jack Daniels is – according to Wiki – the highest selling American whiskey in the world – 11 million cases of Black Label last year. And it’s owned by Forman-­‐Brown, a huge American corporation. Fortune 500 in 2009 ranked them 758 in their 1,000 biggest U.S. corporations league table. 440 million dollars in profit. Eighth in their sector (Beverages). In the same league as Coca Cola in other words.

To say nothing of thousands of employees and “offices and facilities globally”. In 16 European countries, for example. In Beijing and Honkers and Shanghai and Shenzhen in China. Not to mention India, Indonesia, Japan, Singapore, South Korea, Taiwan, Thailand, Vietnam, Australia, Dubai...well, you get the idea.

Email ThisBlogThis!Share to TwitterShare to FacebookShare to Pinterest
Labels: advertising, Streets Ahead