Being A Short Blurb on the Origin of the Word Blurb

Given that we are presenting our Cartoon & Comic Book Tour of London here on The Daily Constitutional this month, it's appropriate that we name-check Gelett Burgess (1866 - 1951), Boston-born humorist and illustrator who gave the word Blurb to the English language in 1907. 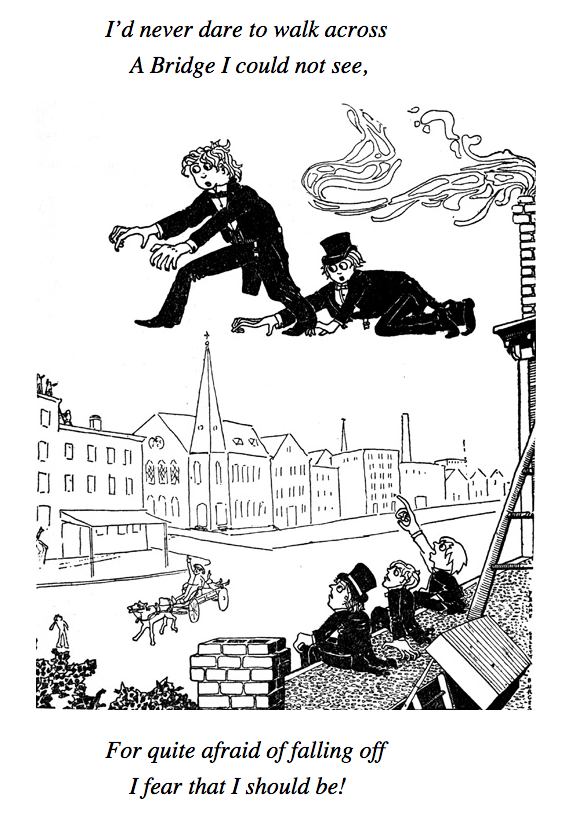 What kind of London Walker are you? If you're the ramblin', gamblin' type – you know, willing to roll the dice and go for it – this just might be the walk for you.  How's that Latin proverb put it? Ovis ovem sequitur. One sheep follows another. No sheep out here. Well, none of the two-legged variety. Just ramblin', gamblin' London Walkers. The one in a million sort.* One in a million who are going to see a bit of London that the 999,999 will never see.

Okay, let's zoom in. Zoom in on a king and a castle. Mighty important, both of them, in the story of the New River. And let it be said now – it's not new and it's not a river. But it sure is fit for purpose. Four centuries on it's still doing what it was built to do – supplying London's water. When the New River was proposed – "he's talking about building, from scratch, a river 40 miles long? Is he mad?" – no one had built such a thing on this scale before. Think of the daunting accuracy that was required. Little wonder an eminent mathematician was called in to survey it. And then there were the trifling sums – irony alert here – involved. The great begetter – the chap who dreamed this little job up and got 'em digging – ran out of money. It was King James to the rescue. And the castle? The Castle Climbing Centre as it's known these days was built in the 19th century. It was a pumping station – you know, to get the flow of the river pumped up, get it getting a move on.

Anything else? Well, our ramblin', gamblin' London Walkers – drawing to an inside straight and hitting it – are going to make the acquaintance of one of London's "lost rivers"; and a couple of "ornamental" lakes; and "Paradise Row"; and "murder and autumnal mists in a fab park"; and "the greatest London novel" of them all; and brick earth and iron and glebe land; and quakers and Ecclesiastical Commissioners and the Metropolitan Board of Works; and two of our greatest poets; and the Virginian company and a royal mistress (and, sure enough, I mean does day follow night, a royal bastard); and "our other Shakespeare"; and "a threat to the Commonwealth...who rode with his face to the horse's tail"; and the invention of horsepower; and a church spires/London village view; and a transvestite; and, well you get the idea...

And hey, let's double down, close with another old Latin proverb: Happy is he who is able to understand the cause of things. If your ramblin' gamblin' nature gets you out on this one you're going to be happy not just because you've got to see things other people don't get to see, but also because Lady Luck's favoured you with "understanding the cause of things," the which is a byproduct of the people who guide this walk, i.e., members of the Inland Waterways Association subset of London Walks guides. They know – from many years, professional, first hand experience – about Inland Waterways, be they canals or New Rivers that aren't new and aren't rivers.

For the dates that this walk takes place, click here.

To go on The New River Walk meet Roger  (or one of his Inland Waterways Association colleagues) outside Manor House Tube (Finsbury Park exit: no. 6)

*Thirty million visitors come to London annually. No more than 30 of them will get out here. Though it's actually probably one in two million. Because at least half of the people on this walk will be locals, Londoners.