The Man On The Time Travelling Omnibus 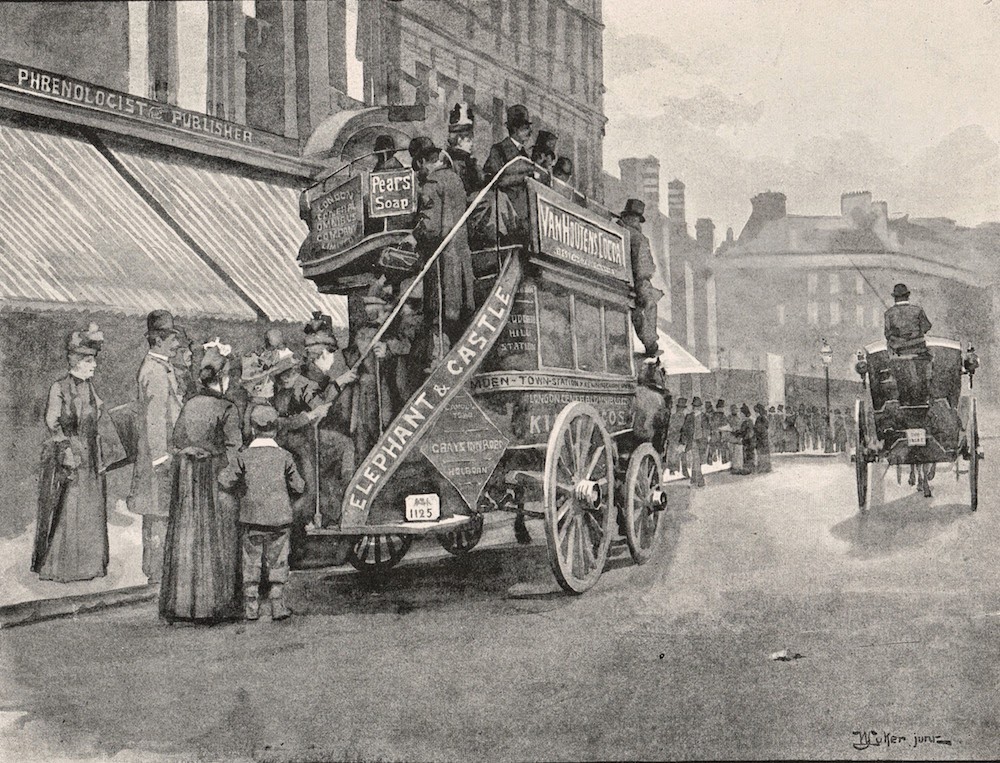 What do we notice?

Apart from the obvious: no motor vehicles.

Not only no motor vehicles, but no street markings or street signs.

There’s no sign here of multi-ethnic London. That’s also way in the future.

The people are well turned out. Well, it’s the City. And there’s the cost of the bus ride. Working people, poor people – and of course they were the vast majority of Londoners – had no choice but to walk.

Notice the sign above the awning: PHRENOLOGIST * PUBLISHER. Not a lot of demand for phrenologists these days.

Most interesting thing of all, though, surely is the omnibus. People riding up top were well and truly up. The well turned out gentleman waiting to climb on board doesn’t look short and he’s standing on the pavement. Wearing a hat that’s got some height to it. If the top of his hat is six feet up – surely a reasonable estimation – well, seated up  top your head and shoulders were going to be 15 feet or more up in the air. The height of a first floor window in a house. Say the word and I’m there. That’s my kind of a London perch.

“Struggle for the ‘bus” is how the piece is captioned. Doesn’t look like much of a struggle. Pretty orderly, pretty civilized. Well, it’s late Victorian London, in a posh part of town.

What else? Notice the “information” on the omnibus itself. Love the elegant upsweep of the destination board: Elephant & Castle this one’s headed to. Beneath it, on that diamond-shaped board, the list of main stops: Camden Town, Gray’s Inn Road, Holborn.

Same thing running on the band round the waist of the omnibus. And up at the back, next to the Pears Soap advert, the name of the omnibus company: London Omnibus Company Limited.

Driver’s up front, looking straight ahead. How does he know when to get rolling? Was there a bell the passengers rang? Or did they just give him a shout.

There’s one street lamp in the distance. And the hackney cabriolet – is that what it is? – that’s just ahead has a couple of lamps affixed  to either side.

Finally, the “bolt on” advertising: Van Houten’s Cocoa and Pears Soap.  Van Houten’s – yes, it’s Dutch – was the chocolate brand in its day. As well known in Europe and the United States as Coca Cola is today. Coenraad Johannes van Houten was the Dutch chemist  who cracked it, figured out how to make cocoa powder. And extraordinary to think how that one product name brings together – crystallises – so much world history. The Age of Exploration. Discovery. Exploitation. The slave trade. Plantations in the West Indies. Expanding empires, military and commercial. You can follow it back from that sign on an 1890s London bus. And you can follow it forward, to today, to globalisation, multi-nationals, etc.

As for Pears Soap, it was the world’s first registered brand. In its day it was the best known brand in the English-speaking world. Thanks to – you guessed it – advertising. A tsunami of the stuff. Advertising in forms that are par for the course today but that had never been seen before Thomas Barratt, the “Father of Modern Advertising,” bent his talents and energies to making Pears the king of soaps. The figures tell the story. When Barratt joined the firm in 1864 the annual expenditure on advertising had never exceeded £200. When he died in 1914 £200 a year had become £2,000 a week.

And putting the name on those London omnibuses, well, that was the skywriting – or Super Bowl advertising – of the 1890s.

And to think that old man Pears had originally signed the wrapping for every bar of Pears Soap, his signature the guarantor of its authenticity.

Nothing else to add except the clincher: Pears is as London as Big Ben. It originated in London and it still is, well, sort of, in London. Sure enough, it’s now made in India by Hindustan Unilever. But 52 percent of Hindustan Unilever is owned by the Anglo-Dutch multinational, Unilever, co-headquartered in Rotterdam and London. And the London headquarters are – wait for it – just there in New Bridge Street, not far from our bus stop.

It’s another London, another world in that photograph. But it’s also our world, our London. It’s there in chrysalis.