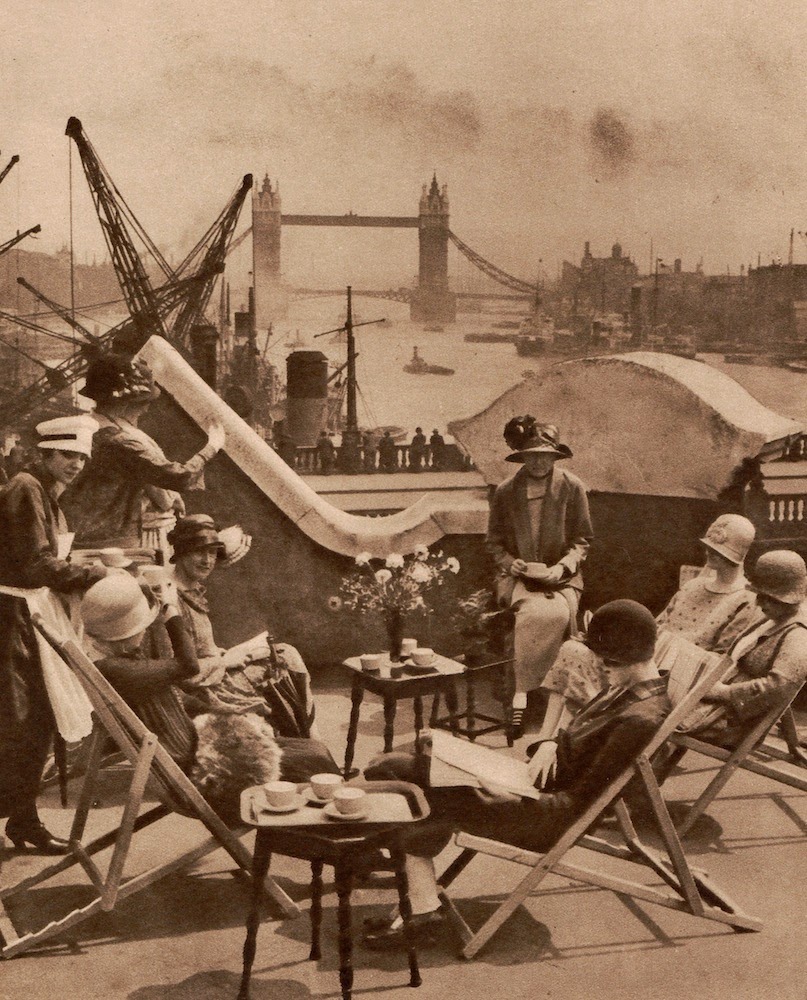 Everything about it is interesting.

It’s mid-1920s. It shows members – and a waitress – on the rooftop plaza of the Langbourne Club for City Women. The view looks out over the Pool of London to Tower Bridge and beyond.

1.   Fashion. Love those hats. They’re just so, well, 1920s. Even the waitress is topped to the north with one.  As for the hemlines, not much you can say about them except that they’re certainly in earnest. Ditto the white stockings. Sensible as opposed to sexy. And the same goes for the shoes.

2.   The tea service is nothing fancy. Plain white china cups and saucers. Functional. Like the trays. But everybody’s having a cuppa. Indeed, counting, it looks as though one or two of the ladies might be on their second cup.

3.   Notice the brolly. The hats, the shadows, it looks like it’s a sunny one, but sure enough that’s a brolly in the mid-foreground (just to the left of the table with the little vase of flowers on it). And where are the handbags?

4.   The vase is a tiny little touch of something delicate, something feminine – in defiant contrast to that big, bad, butch, masculine world that’s “out there”. “Out there” being everywhere – at least that’s the vibe the photo gives off – apart from this tiny little oasis of femininity.

5.   Notice the men on the parapet down below. Lined up, leaning against the parapet. Taking survey of “what’s out there.” Nothing particularly sociable going on with that group. For that matter they’re only in the loosest sense of the word a “group”. Whereas the women – the seated women at any rate – couldn’t be less interested in “what’s out there.” (No way round it, you have to adverbal the one who’s facing us – she’s resolutely turned her back on the big bad Pool of London and everything it stands for.) The men are doing their thing and whatever it is it isn’t social. Whereas the women – well, that’s a highly social gathering. Okay, a couple of the gals are reading. But even so they’re still very much a part of that social gathering. And the magazines – well, they in effect put them at two removes from that big bad butch masculine “world out there.”

6.   As for the London “element” of the picture, well, the striking thing is how much of a working river the Thames was back then. All those vessels, all those cranes and smokestacks.

7.   Anything else? Yes, this, I think. The photo was taken in the mid-1920s. What it surely is telling us is that seven or eight years on the horrors were perhaps beginning to fade – the death grip of the Great War was loosening.