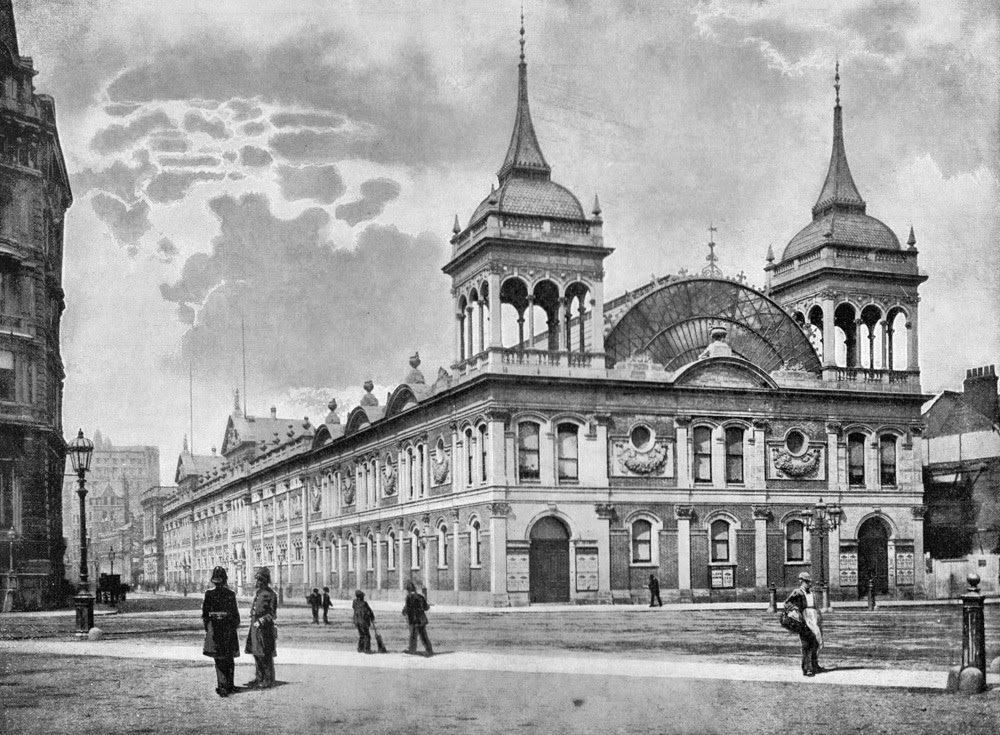 It was better than what we’ve got now.

Though you can be sure Westminster Abbey didn’t think so. Must have driven them crazy. Bet they were cartwheeling with glee when word came that the thing was going to be shut down and pulled down.

Now to see it – in your mind’s eye – you need to emerge from the great West Front of the Abbey. Look 45 degrees or so to the right and over the way.

Yes, Methodist Central Hall. You know, where the first ever meeting of the United Nations General Assembly was held. That great stone tumulus topped off with the fourth largest dome in London and tricked out with portable flogging and beheading kits. (You have to know where to look but the f & b kits are there.)

It’s, well, ok – does good works and all that and has a friendly café – but it can’t hold a Roman candle to the Royal Aquarium, the building depicted here. Here’s what the London Encyclopedia says about the RA.

A classical building of Portland stone designed by A. Bedborough in 1876 as a palace of Victorian entertainment. The main hall had palm trees, pieces of sculpture, tanks of curious sea creatures and an orchestra. There were rooms for reading, smoking, and eating, an art gallery, a skating rink and a theatre. The total cost was nearly £200,000. But the hoped-for intellectual clientele never came and by the 1890s the place had become “a sort of magnified music hall” in which scantily dressed females go through ‘exciting’ acrobatic performances, or are shot out of cannons, ‘genuine Zulus’ dance, and female swimmers exhibit ‘aquatic feats’ in the great tank, or fasting men are exhibited to a gaping crowd.”

Well, you can see why the Abbey was having kittens. I mean, Zulus and scantily dressed females and tanks of curious sea creatures! Gets my vote.

Anyway, in 1903 the site was sold to the Methodists for their Central Hall.

And the wreckers moved in.

But let’s take a closer look than we get from the Encyclopedia.  (And speaking of closer looks, did you notice the crossing sweep in the foreground of the image?)

Some Royal Aquarium tapas coming up....

1. Sir Arthur Sullivan (of Gilbert & Sullivan) opened the Royal Aquarium in 1876. That was his London debut as a conductor.

2. Singing that night was the Welsh nightingale (Edith Wynne), the first Welsh concert singer to gain popularity outside her native land.

3. Crufts Dog Show got started at the Royal Aquarium. The date was March 10, 1886. There were 570 contestants. It was masterminded by Charles Alfred Cruft, ergo the name.

4. The great swimmer Frederick Edward Beckwith made a splash at the Royal Aquarium. He and his troupe regularly appeared at the whale tank facility, demonstrating strokes and life-saving techniques, to say nothing of performing such aquatic stunts as smoking, drinking milk and eating sponge cake underwater.

And in his wake (so to speak), his daughter, Agnes Alice Beckwith.  The most prominent female swimmer in the public imagination, she did the business outdoors as well as at the Royal Aquarium. She treated the Thames like a paddling pool. She swam the 10 mile stretch from Chelsea to Greenwich. On another occasional she swam from Westminster to Richmond. She paved the waves, so to speak, for the British women who represented their country in the 1912 Stockholm Olympics.

5. And there was a lot of feel the burn stuff going on at the Royal Aquarium. In 1894 Launceston Elliot won the British Weightlifting Championship there. Two years later in Athens – for the inaugural modern Olympic games – he was among the first of Britain’s Olympians. Let alone the first Scottish Olympic gold medallist.

6. And that brings us to the father of modern bodybuilding, Eugen Sandow. “The epitome of Teutonic manhood”, Sandow was a Victorian Arnold Schwarzenegger, His vital statistics were 19 inch biceps, 18 inch neck and 62 inch (expanded) chest. He liked to pose naked – naked with the exception of a strategically placed fig leaf. He got to the Royal Aquarium via northern Italy, where he’d been a wrestler. When he arrived in London he challenged the strongman Samson to a weightlifting bout at the Royal Aquarium.  The champ couldn’t see off the new kid on the block. Sandow bent a large iron bar across his neck, lifted a 280 lb dumb-bell with one arm, lifted a 220 lb dumb-bell and broke a chain around his chest before lowering it. A huge crowd cheered him all the way back to Leicester Square, where he had lodgings.

What fun it must have been. And what consternation it must have caused over the way. Barely repressed shudders, let alone stern, reproving looks from the neighbours, the Abbey.

Just this old image now. And memories. Memories submerged there but floating up like so many bubbles. Royal Aquarium memories. Bubbles forever blowing where massive Methodist Central Hall, that body builder of a building, works out today.