Reflections In the Graveyard of St Bartholomew the Great 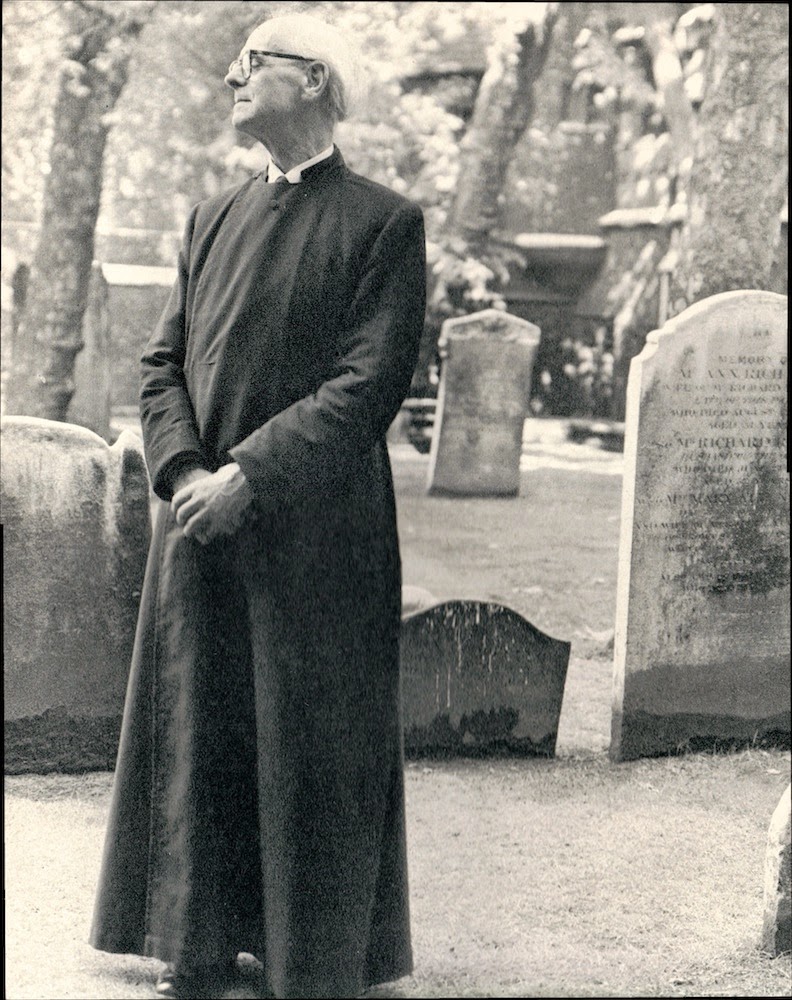 This one saddens me.

Saddens me for us, for London, for St. Bartholomew the Great, for the slumberers pictured here.

And indeed for the perps.

The photo’s over half a century old. It shows the Verger of St. Bartholomew the Great standing in the churchyard. Standing amongst some of the bowed and bent with age – time-honoured – tombstones.

Doesn’t look that way anymore. And that’s what saddens me.

About – it must be 30 years ago now – a couple of vandals went in there one night with sledge hammers and attacked the tombstones. Broke them off. All of them, apart from a lone survivor. Were they interrupted before they could do that last one? I was there a day or two later. And there they were, broken off – the fallen ­– lying beside their stumps.

It was cruel. Like taking a sledge hammer to a mouth of haggard, doing-their-best, old teeth.

The stumps are still there. Just an inch or two above ground. We go there on my Shakespeare’s & Dickens’ London Walk on Sunday afternoon. Lots of literary connections. And for me – and almost certainly only me on that Sunday afternoon stroll – the extra connection. Those old stumps and what they bring to mind.

When I go there I often think about the perps. They’ll be old men now. Well, 50-ish anyway. I wonder, do they ever think about that night? How do they feel now about what they did?

Here’s a poem for them. Poetry – amongst other good things – heals. Sometimes. It’s a poem by the great Portuguese poet, Fernando Pessoa. Pessoa, who wrote about his city, Lisbon – lines that seem apropos here –

Once again I see you – Lisbon…
Phantom wandering the halls of memory,
To the squealing of rats and the squeaking of boards…

Once again I see you,
Shadow passing through shadows,
Shining for one moment in an unknown, funereal light,
Then entering the night like a ship's wake disappearing,
In water slowly become inaudible . . .

Once again I see you,
But myself, alas, I fail to see!
Shattered, the magical mirror where I saw myself identical,
And in each fateful fragment I descry only a piece of myself ---
A piece of you and of myself . . .

But the poem for perps is this one. It’s called “In the Terrible Night.”

In the Terrible Night

In the terrible night, natural substance of all nights,
In the night of insomnia, natural substance of all my
nights,
I remember, awake in tossing drowsiness,
I remember what I’ve done and what I might have
done in life.
I remember, and an anguish
Spreads all through me like a physical chill or a fear,
The irreparable of my past – this is the real corpse.
All other corpses may very well be illusion.
All the dead may be alive somewhere else,
All my own past moments may be existing somewhere
In the illusion of space and time,
In the fallibility of elapsing.
But what I was not, what I did not do, what I did not
even dream;
What only now I see I ought to have done,
What only know I clearly see I ought to have been –
This is what is dead beyond all the Gods,
this – and it was, after all, the best of me – is what not
even the Gods bring to life…
If at a certain point
I had turned to the left instead of to the right;
If at a certain moment
I had said yes instead of no, or no instead of yes;
If in a certain conversation
I had hit on phrases which only now, in this
half-sleep, I elaborate –
If all this had been so,
I would be different today, and perhaps the whole
universe
Would be insensibly brought to be different as well.

But I did not turn in the direction which is irreparably
lost,
Not turn or even think of turning, and only now I
perceive it;
But I did not say no or say yes, and only now see what
I didn’t say;
But all the phrases I failed to say surge up in me at present,
all of them,
Clear, inevitable, natural,
The conversation gathered in conclusively,
The whole matter now resolved…
But only now what never was, nor indeed shall be,
hurts.

What I have missed definitely holds no sort of hope
In any sort of metaphysical system.
Maybe I could bring what I have dreamed to some
other world,
But could I bring to another world the things I forgot
to dream?
These, yes, the drams going begging, are the real
corpse.
I bury it in my heart forever, for all time, for all universes,
In this night when I can’t sleep and peace encircles me
Like a truth which I’ve no share in,
And the moonlight outside, like a hope I do not have
is invisible to me

The detonator lines for me – in this context – are:
If at a certain moment
I had said… no instead of yes…
If in a certain conversation
I would be different today, and perhaps the whole universe
Would be insensibly brought to be different as well.

In the Terrible Night indeed.