London Spy 07:03:15 Our Saturday Review Of All Things #London

CYCLING: Why No Boris Bikes in South East London? – Citymetric.com

SOCIETY: Long-term East Enders Have Their Say On Hackney Hipster – The Guardian

As we embark on our definitive London Reading List here on The Daily Constitutional this week, here are a few literary London stories from the past few days…

The Book Thieves of London – The Dabbler

Book Review: Murder At the Inn – The Daily Express

We are ALWAYS spoiled for choice on the London fringe theatre scene – from new plays by up-and-coming playwrights to neglected classics, it's a vivid world. 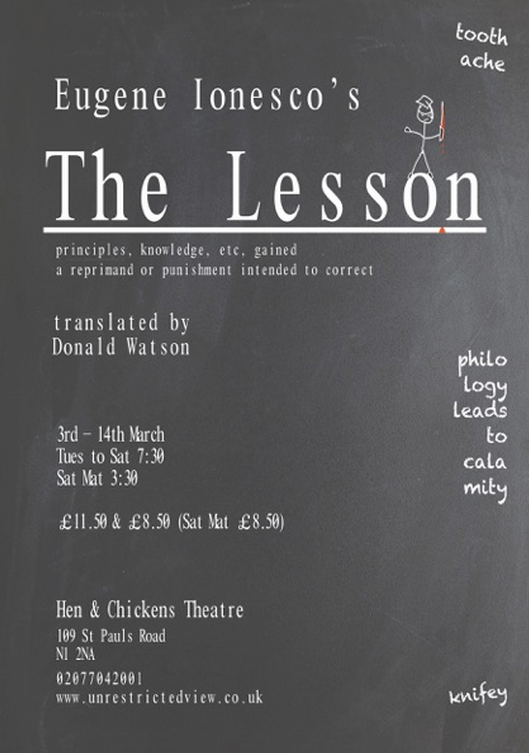 This week we're pointing you north, to Highbury Corner and a powerful revival of The Lesson by Eugene Ionesco at the Hen and Chickens.

Since 1957 the play has been in residence in Paris at the Théâtre de la Huchette, (in a double-bill with The Bald Soprano, also by Ionesco). In English mainstream theatre, however, Ionesco, a leading light of the absurdist movement, is something of a neglected figure these days, which is why it is such a delight to see this revival here in London.

By turns linguistically playful and sinister this short play is both challenging and hilarious.

Darren Ruston plays The Professor, beginning the play somewhere just below coronary and painfully reining-in his passion and rage for the duration of the piece. The Pupil – a deliciously brittle performance by Elena Clements – mirrors our own mounting fears like a thermometer as the tension builds. Angela Loucaides as The Maid provides grim comedy and welcome release in her interjections to the progress of the lesson. It is beautifully paced thanks in large part to the cast and their effortless reading of Ionesco's rhythms.

It's an all-too-rare opportunity to see this great play – this correspondent last saw the piece 28 years ago – so don't miss it.

How to find the Hen & Chickens…

This is our favourite walking story of the week. It was shared by filmmaker Jean-Marc Abela, the creative talent behind London Next Stop the Canadian TV travelogue fronted by our very own Karen Pierce-Goulding.

It's written by Andrew Tate, a freelance writer and neuroscientist, and it's titled Why Steve Jobs Took Long Walks and Why You Should Too.

Beethoven was an avid walker, taking short sojourns to stretch his legs while working, and then spending his afternoons wandering around Vienna. He always took a pencil and paper with him to write down anything that struck him. You can see, or rather hear, the influence of these woodland walks in his symphonies, particularly his 6th Symphony, known as his Pastoral Symphony for its country and woodland elements.

Beethoven’s love of walking rubbed off on another genius of the time, Goethe. The composer and the poet meet in the resort town of Teplice on the Czech-German border and went for a walk and talk through the town. Perhaps, though, this is not the best example of a great walking meeting as, though Beethoven originally idolized Goethe, this was very much a case of never meet your idols. The two disliked each other and never met again. Though I hope Goethe continued his walks.

Thanks for sharing Jean-Marc, it's a great read. Here's a pic of Jean-Marc filming in London with Karen last year… 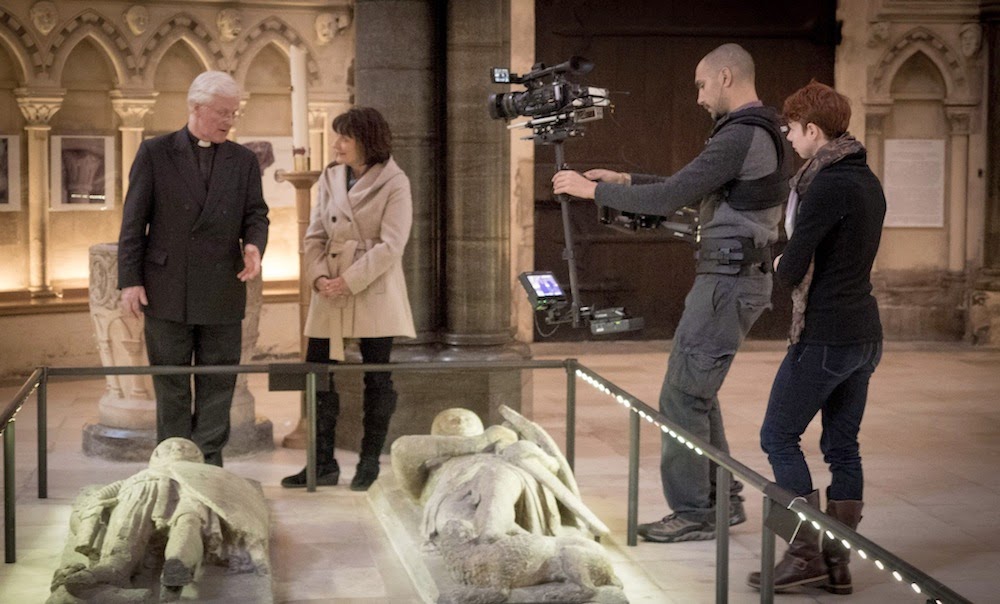 … we'll be adding to our definitive London Reading List… Associate Editor Richard III will be sharing the tale of an extraordinary London Walker… Special Correspondent David Tucker will be holding forth on London, London Walks and the business of "free" walking tours… and we'll be revealing details of the NEW London Walks on the Summer Programme 2015! Thanks for reading, see you next week.