The Ghosts of Paternoster Row… 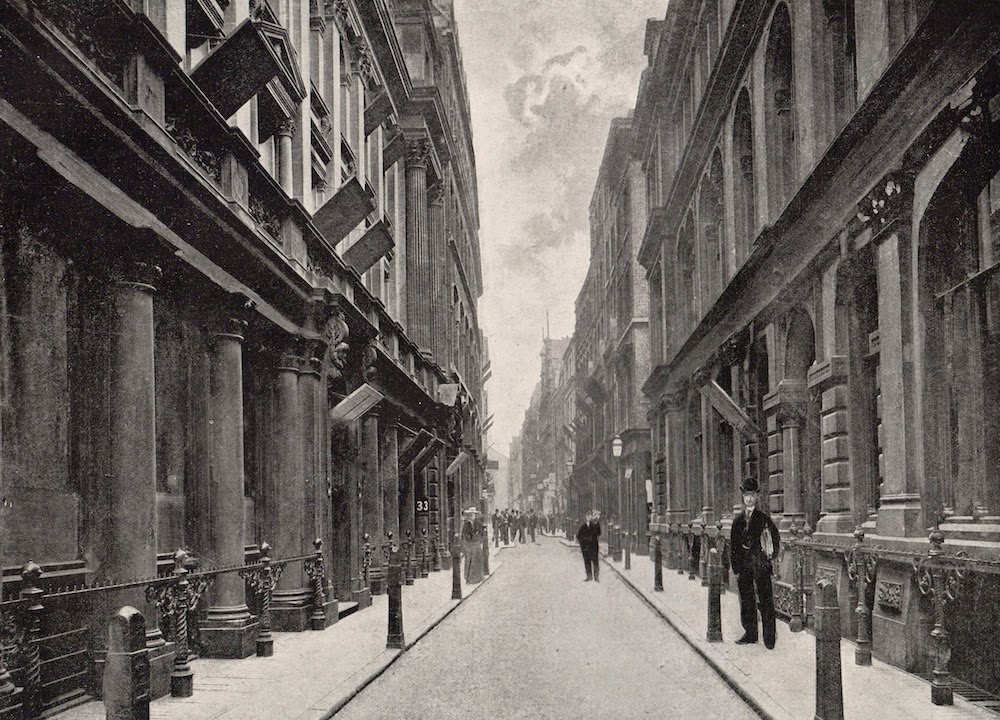 It’s of course shorthand for one of the recurring motifs in western literature. Maybe the most haunting one of all.

Translates to: Where are those who were before us?

Its earliest manifestation in English Literature comes near the beginning of Beowulf. The passage opens:

A modern translation of the full passage (ll. 92-96) gives us: “Where is the horse gone? Where the rider? Where the giver of treasure? Where are the seats at the feast? Where are the revels in the hall? How that time has passed away, grown dark under cover of night as if it had never been.”

And for a living memory* version of the motif try Pete Seeger’s 1960s folk song, “Where have all the flowers gone?”

And what do Ubi sunt? and English Literature have to with this old image of a London street?

They’re the portals we pass through to get onto that street and make our way along it, that’s what they have to do with it.

Hang on. Maybe not utterly gone.

We have the image. We have the name. We have the London sky above it. We have – and it’s in good nick – Amen Corner, from which this view is taken. We have Cheapside – the City of London’s High Street – which is down at the far end of the Paternoster Row we’re looking at. (If you need some more help with your bearings, St. Paul’s will be at the back of the buildings on the right, about half way down the “Row”.)

Where’d Paternoster Row go? Well, let me give you a date, a date that says it all: December 29, 1940. The single worst raid suffered by London. Paternoster Row was one of the victims.

And English Literature? Well, Paternoster Row was the beating heart of London’s great publishing and bookselling trades. Look at those buildings. They could hardly be more “substantial.” They’re fortresses. And mansions. Look at the detailing. The columns. The capitals. The porticoes over the windows. The rustication. The iron work. For that matter, the watch chain across the waistcoat of the gentleman who’s looking at us, wondering where we came from. Publishing, book selling – they were coining it.

Shall we do some sight-seeing? Go for a walk along Paternoster Row?

Not too far along we come, on the left hand side, to Ivy Lane, the site of Dr. Johnson’s Tuesday evening club meetings. Further on: Lovell’s Court, where Richardson wrote part of Sir Charles Grandison. On the right was the Chapter Coffee House, “the resort of literary men.” Chatterton told his mother he knew “all the geniuses there.” And the resort of literary women. It was there that Charlotte and Anne Bronte stayed on their first visit to London.

So turns out we can provide some answers to the Ubi sunt? question. Paternoster Row – we can get back, and get it back. We’ve got our image. We’ve got names. We’ve got Boswell’s “despatches” from the Tuesday club sessions. We’ve got Charlotte Bronte’s impressions of London in Villette (she provides some protective coloration, but it’s London all the same).

Hey, you pitch up on my Shakespeare’s & Dickens’ Sunday afternoon bumble one of these times and put in a request I’ll show you where the Chapter Coffee House stood. It’ll be a bit of a shock, so consider yourself forewarned.

*Well, for some of us at any rate.

Email ThisBlogThis!Share to TwitterShare to FacebookShare to Pinterest
Labels: old photos, The City of London