No.17: The Longest Cocktail Party – An Insider’s Diary of the Beatles, Their Million-Dollar Apple Empire And Its Wild Rise & Fall…
By Richard DiLello 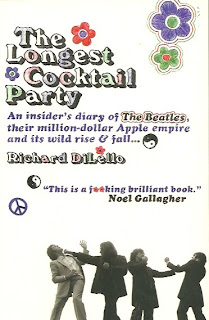 We were in Savile Row two weeks ago on the London Reading list just yesterday in Part 16 of our series, and we’re back again this today. Only this time we’re looking for a very different business.

This business was famed for excess, mismanagement, petty theft on a grand scale, alcohol and drug abuse and upsetting the neighbours. Oh, and they made records, too. Pretty good ones at that. The business was Apple, the proprietors The Beatles.

In the broader history of Savile Row, The Beatles' record label occupies just a heartbeat of time. But its story remains one of the most vivid ever played out on that fabled London street.

DiLello worked in the press office at Apple alongside the legendary press officer Derek Taylor. His official role was as Client Liaison Officer, but his unofficial title was that of House Hippie.

His narrative reads almost like a movie script – told in snippets of gossipy conversation, dialogue between the major players of Beatleworld, and DiLello’s own up close observations of the madness that was the fag end of the 1960’s.

Throughout the book we feel as if he is “one of us”, our man on the inside. This is no “My Life As The Fifth Beatle” self-hagiography. His sense of being an outsider – both as a newcomer to The Beatles’ inner circle and as an American in England – creates a feeling of bewilderment out of which the comic observations flow in a wild torrent.

Despite the disintegration of the company – and thus the band – all around him, as the lawsuits fly and the 60s come to a bleak close – the writer’s sharp sense of the absurd remains intact throughout.

Left to rely solely on his own storytelling talent, DeLillo would have written a witty and insightful book about any subject. And the book’s strength is all in the writing. Lesser scribes have had the same cast of characters to work with and have somehow contrived to turn The Greatest Show On Earth into a dreary soap opera.

DeLillo, however, relishes in his walk-on players – headed, of course, by The Beatles themselves, but supported ably by Hell’s Angels (on their way to Czechoslovakia where they planned to “sort out” the political situation back in 1968), a family of hippies keen to spirit John and Yoko away to a Pacific island, Ken Kesey and the local bobbies. He is always at the very least curious about the people in his story – he has no scores to settle, no record to set straight – and it is this humanity that underpins the whole tale.

There are lots of Beatle books out there. Many of them cover The Fabs’ entire career and thus present them as a Liverpool band conquering the world. This one catches up with them toward the denouement of their tale, act three, where they are no longer the fresh-faced lads from up north. At the point where DiLello’s narrative kicks in, they are already bigger than any band had ever been – or, indeed, would be again. Liverpool seems from a distant era: this is very much a London book.

It seems even more unusual that no one has ever made a movie of the book given that it practically reads like a movie script already. Well, that’s about to be put right, too. Liam Gallagher’s In1 Productions is on the case and the picture is rumoured to be ready for release in 2012. If it’s a broad truism that the film is never as good as the book, then the movie makers have got a mountain to climb here. This is among the greatest of all Beatle books, and London books too.