A Tale of Two Leaflets.

(And of two times. Back then, Mrs. Thatcher was prime minister, Ronald Reagan was in the White House, the Soviet Union was still the Soviet Union, the Berlin Wall was still up and running, the Compact Disc was brand new (it was introduced in December 1983), the IRA was setting off bombs in London, the House of Lords was about to let in the television cameras, American football great Aaron Rodgers was in the womb (in Nov. ’83), ditto Mark Zuckerberg, Google was 15 years in the future (Larry and Sergey were a couple of 10-year-olds), Leonardo Dicaprio had just celebrated his 9th birthday, Wayne Rooney wasn’t even a glint in his father’s eye, well, you get the idea…)

At no little risk of belabouring the obvious: the difference a third of a century makes! Both on the big stage – and the London Walks stage.

Back then – the Winter of 1983-84 – there were a couple of London Walks on Saturdays, five on Sundays, none on Mondays, one on Tuesdays, one on Wednesdays, one (or none) on Thursdays, and two on Fridays. 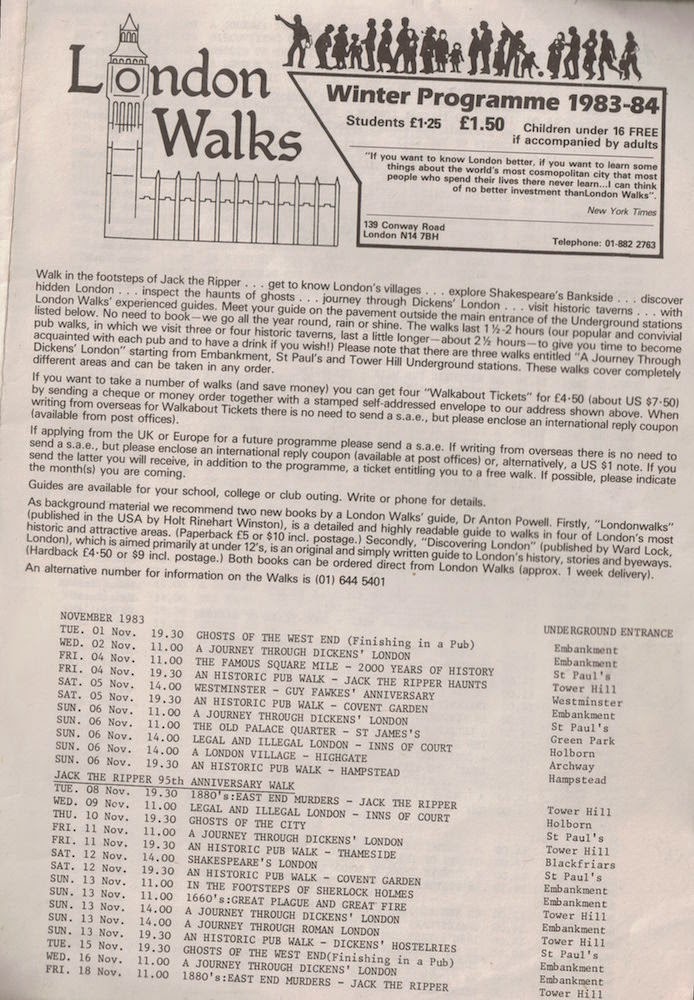 Design? Well, the 83-84 version – no way you’re going to say that document was “designed”.  It really couldn’t have been more basic. Was crude but functional – told you what you need to know.

Today’s London Walks leaflet still ticks that box of course – tells you what you need to know. But crude, primitive it ain’t. Designed it is.

And cost? Well, in real terms certainly in the same range. If anything, a London Walk will, in real terms, be a better bargain today than it was back then. But you can see what inflation’s done to the £ since the early 80s.

Let alone our – Mary’s and my – 25th anniversary at the helm of the Good Ship London Walks.