The great American novelist William Faulkner said he had no need to leave Oxford, Mississippi because the whole world was to be found there – that small town in Dixieland was “a microcosm not only of the south but also of the human race.”

Trafalgar Square is about 12,000 square metres.

The southern bit of T Square’s about a tenth of that, say 1200 square metres.

Lots of people in Trafalgar Square. All of them looking for something.

So, yeah, we’re not talking about London here – about how London’s a world and everything’s to be found there.

We’re talking about a tiny sliver of London. 1200 square metres.

And talking about a moment in time.

Well, several moments for these two. 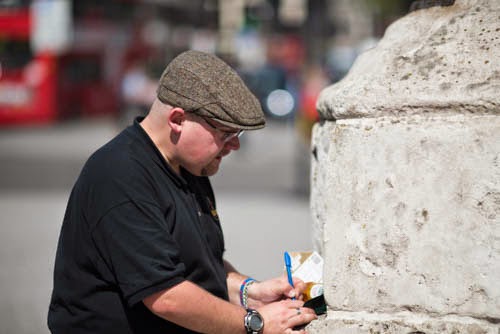 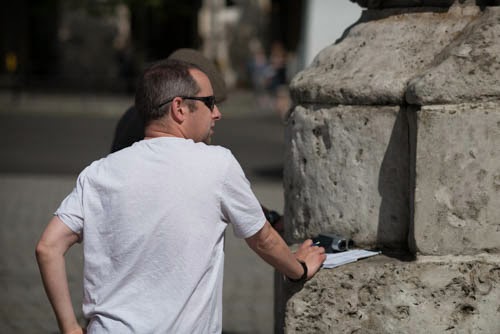 Noticed them at the foot of the pedestal which the Charles I equestrian statue bestrides. Furtive’s not quite the right word, but they were definitely holed up behind the plinth. Peeking round it. Almost like duck hunters in a blind.  They had a pair of binoculars. And clipboards on which they were jotting down – had jotted down – hundreds of numbers.

Puzzled me. Who were they? What were they doing? Some sort of undercover operation? They didn’t really look like plain clothes cops. Or their Special Branch brethren.

So I asked them.

“What are you doing?”

And no, they weren’t Transport for London operatives or Greater London Authority operatives or City of Westminster statisticians.

Have to confess, it had never occurred to me that train spotters have cousins who hoe a rather different row, away from train stations and tracks and junctions.

Now, thanks to that little postage stamp bit of Trafalgar Square, I know different. And for what it’s worth, I suspect, as these things go, Bus Spotterdom is a farther shore than the Train Spotter Universe.

And what was I doing there? What was I looking for? 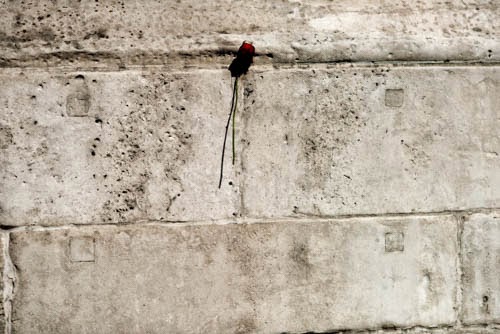 This. The rivet holes in particular. See where they’ve been filled in. They tell the story – well, part of the story – of the brass inscription that was affixed there and is now gone. Where’d it go? What’d it say? It’d be nice to know, wouldn’t it. But even just knowing that it was there – and seeing the proof that it was there – well, that’s a teensy bit pleasing. A teensy bit pleasing if you’re – as every London Walks guide is – lashed to the mast of wanting to see things that other people would never clock, never spot, never see.

And then there was this guy. 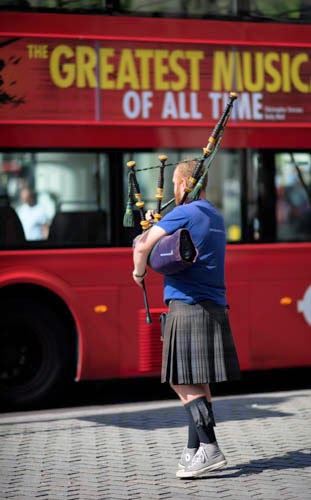 What was he seeing?

I think I know.

He was seeing what the music speaks of. That’s there’s a land called Scotland, a place so beautiful that, well, why would anyone want to live anywhere else, that’s what.

Shhhh. Listen up. Hear it? The music has the brilliance and aspiration and ephemerality and yearning and sadness of a firework. Arcs him – and maybe us – yonder. Momentarily. Gives expression to how he feels about not being there. In that beautiful place. That place of the heart. About being so far from home. That’s the haunt of the bagpipe. It’s mourning made music.*

Playing there, piping amid the alien corn (in Keats’ line). Though maybe not so alien. After all, the London street Scotland Yard is just a highland fling from where the musician had positioned himself. Not the rozzers originally – rather the place where Scottish kings touched down when they were in London. Doubt very much if the musician had any idea about that. Though he may have been, all unawares, hewing to something invisible but axial. Something primal. And never mind if he was unaware. I wasn’t. And that bit of psychogeography gave the vignette an added sheen of poignancy, if only for me.

Who needs Oxford, Mississippi’s 10 square miles when the whole world can be found in a few square metres in central London? In a postage stamp-sized fragment of Trafalgar Square.