Here we've picked out a couple of London locations from our Great London Record Sleeves series –  Parklife (1994) and Modern Life is Rubbish (1993), both by Blur.

The inner booklet and back cover pics for Blur’s 1994 Parklife album were shot at the famous Walthamstow Stadium. This grand old greyhound racing venue closed in 2008.

This traditional working class backdrop underpins Blur’s artistic volte-face away from their arty-indie roots to explore Britishness in rock music in the shadow of both the 1960s “British Invasion” and late 70’s punk. It is widely regarded as a landmark in Britpop and 1990s pop culture. 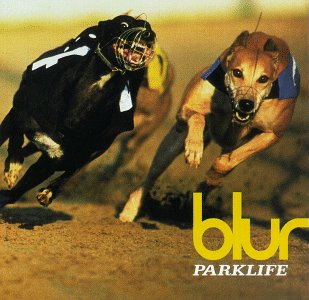 The album cover was inspired when singer and lyricist Damon Albarn saw sports pictures in the window of a William Hill betting shop on the King’s Road. The front cover is a library picture by photographer Bob Thomas. Sleeve design is by design team Stylorouge.

Elsewhere in the world of pop, East 17 filmed at the stadium for their House of Love video.

The Parklife sleeve was featured in the Royal Mail’s series of classic album cover stamps in 2004.

As with Parklife, 1993's Modern Life is Rubbish has a library picture on the sleeve – the famous steam train The Mallard – again sourced by design team Stylorouge. The CD booklet features an oil painting of the band on a District Line tube train, the work of Paul Stephen.

The name of the album was once again inspired by something spotted in a London street. Singer and lyricist Damon Albarn noted a piece of anarchist graffiti on the Bayswater Road worded Modern Life Is Rubbish. In conversation with NME scribe John Harris, Albarn went on to proclaim that the phrase was “the most significant comment on popular culture since 'Anarchy in the UK'".


P.S. On the topic of the District Line, this weekend all stations between South kensington and Tower Hill are closed – please leave extra time to get to your London Walk! Full info at TFL HERE.

See you at 2:00p.m! In the meantime, here’s our own Rock’n’Roll London video…