The Portable Flogging and Beheading Kit: Don't Leave Home Without It #traveltips 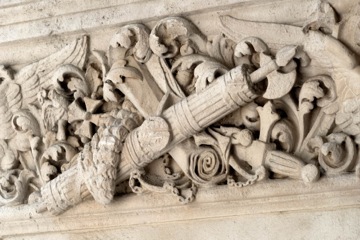 London’s full of them.

There’s one in Trafalgar Square. It’s hidden but if you know where to look you can see it.

There are several in Parliament Square. They’re hidden but if you know where to look you can see them.

There’s this one. It’s right on the seam, right where London meets Westminster. It’s hidden but if you know where to look you can see it.

These things are one of the very good reasons you go on London Walks. Just to get to see them in the first instance – they’re needles in the London haystack so it’s unlikely that you’ll be able to spot them off your own bat.

And secondly to have them “opened up” to you. “Promote” your understanding. Shed some light on them. Explain them.

I can do a quick run-through here.

It’s a Roman symbol of power and authority.

Aside here: we’re so used to – accustomed to – our patch, our “habitat” that there’s a great deal of raw, extraordinary stuff we take for granted. We’re so used to it we don’t see how raw it is, how extraordinary it is. In many cases don’t see it period. We never actually open the furnace door and get the full blast of the heat of meaning on our face. By that I mean, this city – every city I should think – is chock-a-block with symbols of power and authority. More than symbols in a lot of cases. It’s everywhere we turn, in our faces all the time. And we think nothing of it. 21st century portable flogging and beheading kits (and their appurtenances and “announcements”) are everywhere – we’re swimming in a sea of them. And we’re completely unaware of them. Getting used to – and taking for granted – your place and your times, it’s like blinders on horses,

And I think that’s one reason the past – the visible past – is so important. It provides perspective. You see a Roman portable flogging and beheading kit – and get it, understand its particulars – it makes you see your city afresh. Makes you ask some pretty searching questions. “Do we – half way through the second decade of the 21st century – have our own version of portable flogging and beheading kits?”

No prizes for getting the answer to that one right.

Anyway, let’s flit on back to Roman times. Time for the quick “run-through.”

When the Romans conquered a place they’d have a parade. A parade that rained on – so to speak – the people they’d conquered. At the head of the parade would be a Roman centurion carrying that bunch of staves with the business end of the axe coming out of the end like a fang in a rattler’s mouth.

The staves were called fasces. Recognise that word? Thought so. They were to flog you with if you misdemeanour’d. The axe was to chop off your head* if you did something the Romans seriously disapproved of.

Show you who was boss. And what would happen.

Doesn’t get much more basic than that.