Talented North London artist Michael Haynes (who, by day, works at East Finchley Underground station) is mounting his biggest exhibition yet this month. This Is Music takes legends of pop and rock as its subject and features The Who, John Lydon, Amy Winehouse, The Beatles and more.

Confession time: a big, fat fashion mag is one of London Spy's most guilty pleasures. Love 'em, I do.

But sometimes we learn great stuff among the frivolity. Who among us, I ask you, could resist the following headline:

I, for one, was intrigued…

If you care about your shoes—like really, really care—keep their respective boxes and place them inside after each wear. Think of your shoes' boxes as their beds. Stuff the toes with the tissue they came with (that's like their teddy bear). Do not allow them to touch each other—they need their space. What's that, you say? You don't have the time? You don't have the space? Ignore your shoes, then—but don't expect them to look nearly as nice as they could.

They're not in Kansas any more… or ARE they?

A million dollar reward is being offered for the safe return of Judy Garland’s famous ruby red slippers. The late Hollywood star wore the shoes in the Wizard of Oz. They were stolen from the Judy Garland Museum in Minnesota and now an anonymous donor has joined efforts to find them. The slippers will have been missing for ten years this August.

Thanks to Dublin-based News Talk 106-108 for the story: www.newstalk.com

London Spy walked 15 miles through the capital last week on the Tube strike day. But that's nothing compared to this Minnesota-based Star Wars fan…

While Kevin Doyle may be wearing a costume to Comic-Con International in San Diego like many other attendees, his Star Wars gear serves a much greater purpose (grab the tissues, folks).

In honor of his late wife Eileen, the Minnesota man has walked over 600 miles down the California coast while wearing a Stormtrooper costume. According to reports, Doyle and his wife were huge fans of the sci-fi series and would often dress up in costume together.

Map of the Week 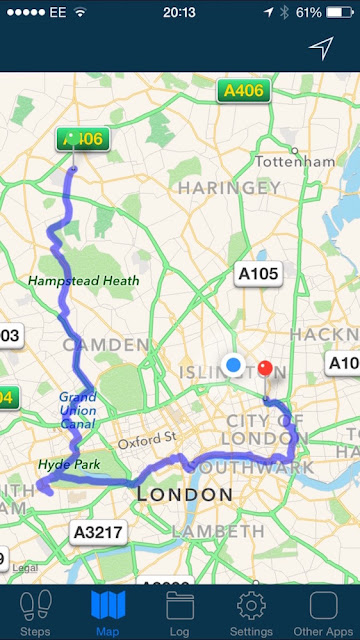 A very hot day last week London Spy saw a young woman dressed in those meticulously ripped jeans one often sees about the lower half of the more fashion-conscious slattern. This particular "fashionista" stood out because she was applying sunblock to the holes in the denim, presumably to avoid looking like a zebra from the waist down when divested of her strides.

Personally, I think she's missed the chance to start a whole new look…

Read in London This Week

Ben Aaranovich's hugely popular Rivers of London has been turned into a comic book. We picked up our copy at Orbital Comics in Great Newport Street. We'll be adding it tour or Cartoon & Comic Book Tour of London series here on the Daily Constitutional next week. (You can catch up with that "virtual" tour of London here: cartoonandcomicbooklondon.blogspot.co.uk

Read in London This Week 2

Adam's Rock'n'Roll London Comic Book Fanzine has now picked up readers in Acton Massachusetts, College Station Texas, Hampshire and Edinburgh! This week he's started a Crowdfunder campaign to help fund the printing of issues two and three and you can buy a signed copy of the comic (which features a self-guided tour of Pink Floyd's London) from him on this week's Rock'n'Roll London Walks (Wednesday 7pm and Friday 2pm). The comic is also available online AND there's a free six page sampler download.

London Walks guide, comedian and performer Andrew Lukas has set up a Facebook event for his forthcoming Alternative Comedy Walk in Soho on the 2nd August. The walk meets at Leicester Square tube at 10:45a.m. Join the Facebook event HERE. 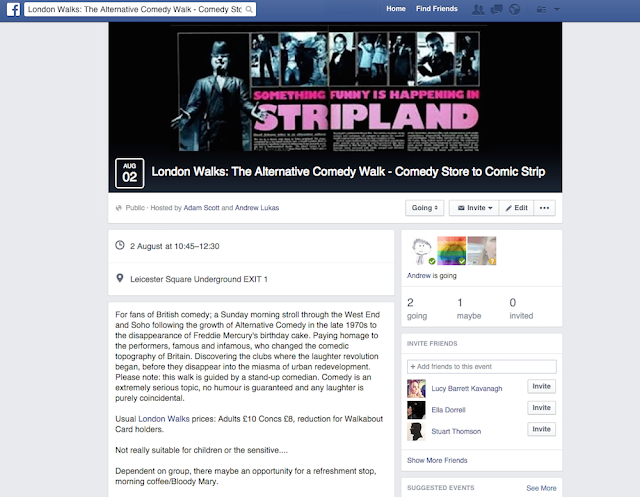 London Spy will return next week.