OLYMPICS: The Olympic Legacy Under the Microscope – The Guardian

With London Walks guide & comedian Andrew Lukas leading his History of Alternative Comedy Walk next Sunday 2nd August, we're pointing you in the direction of The Museum of Comedy… 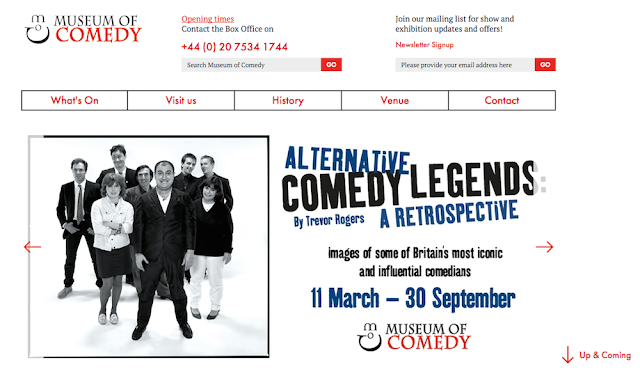 We love our big, attention-grabbing museums here in London and we are spoiled for choice with blockbuster exhibitions the whole year round.

Better yet are the tiny gems, the unsung heroes, the under-funded off-the-beaten-track collections, the like of which we covered in our recent London Museums Podcast.

The Comedy Museum is one such gem, describing itself thus:

Founded by Leicester Square Theatre director Martin Witts, the Museum of Comedy is an interactive, immersive museum for all the family, featuring iconic props and artefacts from our rich comedic history and housing one of the most comprehensive collections of Comedy memorabilia ever to be amassed in one place.

The museum has been lovingly put together by Martin with his collection of over six thousand artefacts and print from some the most iconic comedians and comedy shows both past and present, amassed during his career spanning over three decades in the comedy industry.

It's only £5 to get in, £4 concession children are free but must be accompanied by an adult. Check the opening times here: www.museumofcomedy.com/visit_us/opening_hours/

London Spy once wore a a pair of Converse All Star sneakers to an osteopath appointment – at which the osteopath simply barked a laugh out loud and said, "There's only one safe place to wear those shoes: in bed while asleep."

It seems that the folks at Converse have – at last! – attempted to tackle this issue…

Converse plans on answering this long-standing critique today when it unveils a spiffier, pricier version of the nearly century-old sneakers. The biggest upgrade in the Chuck II, as the company is calling the revamped shoes, comes with technology imported for the first time from corporate parent Nike. Lunarlon, a lightweight, bouncy foam used in Nike's running and basketball shoes, will now be found in Chuck's rubber sole.

Jim Calhoun, the 48-year-old chief executive of Converse, knows exactly what people say when they gripe about his shoes: "I love them, I just wish I could wear them for more than a couple hours." He knows from personal experience, too. During an interview last week at new headquarters in Boston's North End, Calhoun wore an untucked blue shirt, jeans, and black-and-white Chucks. Now he believes sneakers need to feel good to remain relevant. "Kids are growing up in a world where they know comfort, expect comfort, and won't stand for discomfort," Calhoun says.

Read the full story at bloomberg.com – and if you get a pair and find 'em useful, please drop us a line. We're always looking for good shoe recommendations!

On that topic, do check out our London Walks guides' guide to good boots and shoes HERE.

We love a good podcast here at The Debrief HQ. The time-starved girls’ best friend, you can get your science on with Radio Lab, who ask all life’s big questions. If you fancy yourself as an amateur film critic, then check out Bonnie and Maude who deliver weekly episodes dissecting the world of film, old and new. And last but not least, This American Life. Get the inside scoop on all walks of American life, it’s eye opening (or is that ear opening… sorry) and you won’t want to stop listening.
Full piece at www.thedebrief.co.uk

(And if you want a good podcast, try ours! Here's the link: www.londonwalks.podbean.com)

Last word on walking & footwear: Don't try this at home, kids. Or anyone else's home, for that matter…

(The New York Daily News) A homeowner has accused her neighbourhood’s mailman of breaking into her home on Wednesday morning to try on a pair of thigh-high black boots while off-duty, local reports said.

Richard Ringer, a 39-year-old New Hampshire mailman, was arrested Wednesday after a woman said he broke into her home and tried on her black boots.

The woman discovered the intruder through a new motion-sensitive security camera that sent her phone an image of 39-year-old Rich Ringer sporting the footwear.

Thanks to @JestSetLisette for the following shout out on Twitter…

Great to meet up with Rick Steves in London's East End last week. Rick was on a flying visit to update his invaluable London guide book. And he posted a short video on his Facebook page (www.facebook.com/ricksteves) giving us a behind-the-scenes glimpse of life as a travel guru…


Madeleine was quoted in a post about the great news featured at the top of this London Spy post – precious Norton Folgate has been saved from property developers. Thanks My Friend's House, thanks Madeleine and jolly well done to everyone who did their bit in the preservation campaign…

“Oh I can’t bear it – everything of character in London now needs saving from dastardly clueless property developers; homes, studios, shops, markets etc – I would ban all property developers from London. Good news about Norton Folgate and Spiegelhalter’s today though so well worth fighting those philistines!”


London Spy will return in September