A Love Letter to Fitzroy Square


Fitzroy Square On A Saturday Afternoon. It’s A London Thing.

Trafalgar is more famous. Hanover is posher. Hoxton is more fashionable. Kensington is older. But Fitzroy Square, for me, is London’s best square. Especially on a Saturday afternoon.

While the rest of London is off shopping on Oxford Street, going to football matches or at a matinee in the West End, Fitzroy Square is deserted.

I first discovered Fitzroy Square on a Saturday afternoon about six weeks after moving to London. Out on one of my rambles to try to make sense of the place (project status: 20 years in and still ongoing) I stumbled upon the empty square right in the heart of the city.

So plugged-in to the urban growl had I become that the stillness actually began to freak me out. It felt like some post-apocalyptic sci-fi movie from the 70’s – London laid waste and I, Charlton Heston-like, the only survivor. I turned and headed for the reassuring hum of the main drag.

It’s is an atmosphere that I have grown to love over the years – pockets of peacefulness slap bang in the middle of the word’s greatest commotion. It is contrary old London’s loveliest caprice. 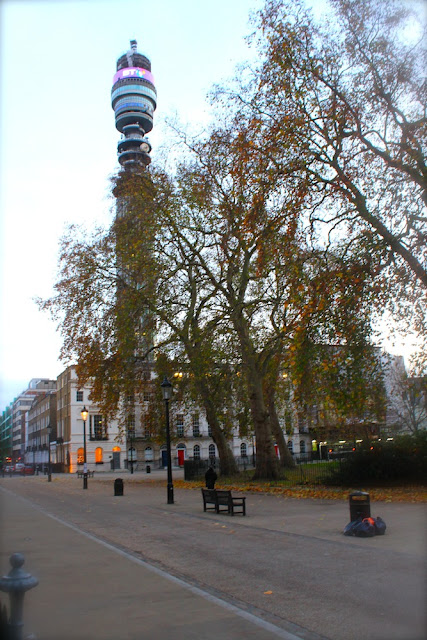 Fitzroy Square also a great spot from which to revel in London’s constant fireworks display of architectural coups d’theatre. Classic stucco cowers as if aware that the Brutalism of the BT Tower lowers nearby. Glimpses of both mews and modernity hide around every corner.

It is dotted with plaques –Virginia Wolf among them. And there are no shops – an unusual and delightful break from commerce. If, however, the millennial urge to splurge seizes you, then French’s Theatre Bookshop is at hand, as well as of outstanding fish and chips at Fishbone in Cleveland Street.

Email ThisBlogThis!Share to TwitterShare to FacebookShare to Pinterest
Labels: Fitzrovia