“Too hard to choose just one,” he replied, “so how about five? One from each of the collections, each of which has a strong London connection." 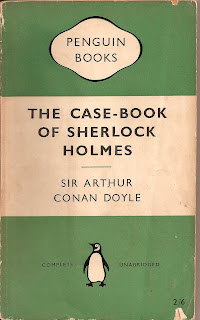 1. The Blue Carbuncle
The perfect seasonal tale, with Covent Garden, Bow Street, the British Museum and a missing jewel.

2. The Greek Interpreter
The clubland of St James's, the lodgings of Sherlock's brilliant brother, and a kidnapping and murder plot.

3. The Second Stain
Murder in Westminster and visit from the Prime Minister as a vital letter goes missing.

4. The Dying Detective
From the East End docks to ‘something nutritious’ at Simpson's in the Strand as Holmes and Watson trap a ruthless poisoner.

5. The Illustrious Client
An attack on Holmes in Regent Street, a trip to Charing Cross Hospital, and research for Watson at the London Library on the trail of the lethal Baron Gruner.