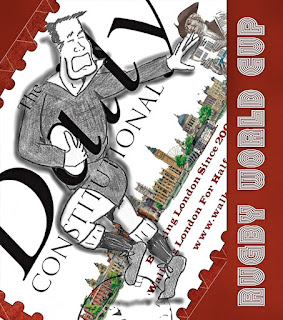 As the Rugby World Cup hits East London tonight, here's another of our snippets from the annals of London sporting history…

When a "County" Took On A "Continent"

The Olympic Stadium in East London makes its bow in the Rugby World Cup tonight when France take on Romania at 8:00p.m.

At the 1908 London Olympics Rugby Union was an Olympic event. Unfortunately, France withdrew from the tournament leaving only two teams to compete for gold and silver: Australasia and Great Britain.

Although competing under the name Australasia, the side featured only Aussie players – who were in Britain as part of the inaugural Wallabies tour. The Great Britain XV was composed entirely of the 1908 county champions Cornwall. The final, played at White City Stadium, saw the Aussies take gold running out 32-3 winners.