A Little Seasonal #Dickens* (*No Not THAT Season… Not YET Anyway)

Further to our earlier post (catch up with A Yank Does Dickens HERE), here's David on Martin Chuzzlewit and beyond… 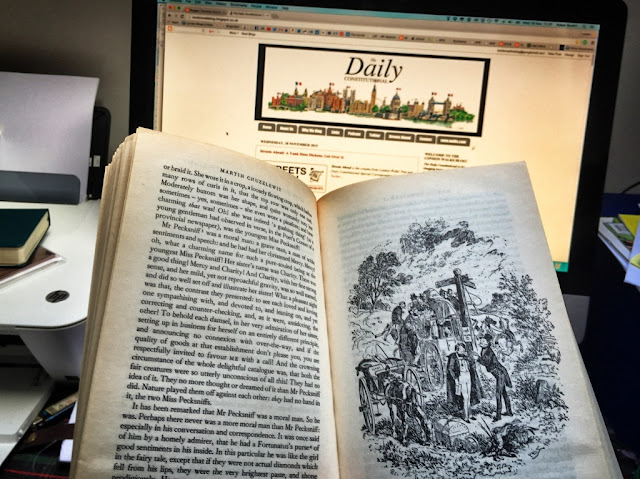 Here’s one that won’t have occurred to you.

1.     Dickens isn’t just the laureate of London, a “city writer.” He could, on occasion, be pitch perfect about the English countryside and the English village.
2.     Dickens – when he gets there, when he owns that pitch-perfect rustic zone – isn’t just doing the prose equivalent of Oliver Goldsmith (The Deserted Village). Even more remarkably he’s doing with prose what Caravaggio did with pigments on canvas.

A case in point: Chapter 2 ­– effectively the opening – of Martin Chuzzlewit. It’s this time of year. In a village near Salisbury in Wiltshire. I’ll give you just a couple of paragraphs. And defy you not to be put in mind of Caravaggio – of the sheer drama of his “lighting” against the foil of the canvas’s deep shadows.

Here’s the second paragraph of Chapter 2 of Martin Chuzzlewit.

“Like a sudden flash of memory or spirit kindling up the mind of an old man, it [the late afternoon autumn sun] shed a glory upon the scene, in which its departed youth and freshness seemed to live again. The wet grass sparkled in the light; the scanty patches of verdure in the hedges – where a few green twigs yet stood together bravely, resisting to the last the tyranny of nipping winds and early frosts – took heart and brightened up; the stream which had been dull and sullen all day long, broke out into a cheerful smile; the birds began to chirp and twitter on the naked boughs, as though the hopeful creatures half believed that winter had gone by, and spring had come already. The vane upon the tapering spire of the old church glistened from its lofty station in sympathy with general gladness; and from the ivy-shaded windows such gleams of light shone back upon the glowing sky, that it seemed as if the quiet buildings were the hoarding place of twenty summers, and all their ruddiness and warmth were stored within.”

The way the whole scene comes to life – and, yes, is personified. The way every detail is a vivid, perfectly executed brushstroke.

It’s all superb stuff but I especially love that final image. He’s judged it perfectly – the camera picking out this and that in the outdoors – and then zooming in, fittingly, at paragraph’s end (end of day, end of autumn) on the cottages with their “ivy-windows”, their “gleams of light” in concert with “the glowing sky.” To end with that thrilling high C: as if those buildings and cottages “were the hoarding of twenty summers, and all their ruddiness and warmth were stored within.” And as long as you’re at it, do notice – in passing – the progression, the paradoxically perfect completion, from the paragraph’s opening “bars” – “kindling up the mind of an old man” to “”all the ruddiness and warmth” of a youthful “twenty summers.”

Did ever English cottage at dusk in the late autumn look more inviting? Was one ever described more lovingly, let alone thrillingly?

And then, with Caravaggio in mind, move on to paragraphs four, five and six.

“A moment, and its glory was no more. The sun went down beneath the long dark lines of hill and cloud which piled up in the west an airy city, wall heaped on wall, and battlement on battlement; the light was all withdrawn; the shining church turned cold and dark; the stream forgot to smile; the birds were silent; and the gloom of winter dwelt on everything.

“An evening wind uprose too, and the slighter branches cracked and rattled as they moved, in skeleton dances, to its moaning music. The withering leaves no longer quiet, hurried to and fro in search of shelter from its chill pursuit; the labourer unyoked his horses, and with head bent down, trudged briskly home beside them; and from the cottage windows lights began to glance and wink upon the darkening fields.

“Then the village forge came out in all its bright importance. The lusty bellows roared Ha ha! to the clear fire, which roared in turn, and bade the shining sparks dance gaily to the merry clinking of the hammers on the anvil. The gleaming iron, in its emulation, sparkled too, and shed its red-hot gems around profusely. The strong smith and his men dealt such strokes upon their work, as made even the melancholy night rejoice, and brought a glow into its dark face as it hovered about the door and windows, peeping curiously in above the shoulders of a dozen loungers. As to this idle company, there they stood, spellbound by the place, and, casting now and then a glance upon the darkness in their rear, settled their lazy elbows more at ease upon the sill, and leaned a little further in: no more disposed to tear themselves away than if they had been to cluster round the blazing hearth like so many crickets.”

First of all – just in passing – that felicity that opens the second paragraph in this passage: the “slighter branches” moving in “skeleton dances” to the wind’s “moaning music.” The throws-the-switch word is of course “skeleton.” Not “skeletal”, “skeleton.” It’s hardly more than a casual, just passing, throw-away bit of observation. The merest spark – but a spark of genius. Did ever single word say more about the bounteous nature – the fecundity – of genius?

Now when you’re ready take your eyes off that spark. Do a pb – a pull back – to the full scene. It’s not just a description. It’s a painting, a Caravaggio. You think all those details are the orchestra tuning up? No, it’s all joined up. Everything’s working together. That’s the orchestra playing. The light, the light. Turner’s dying words were “the sun is God.” Darkness has descended on the village so sure enough Dickens draws our eye to where it would be drawn – the place of the most light, the village forge. The joie de vivre of every element of the scene, including the  “dark face’ of the “melancholy night.” It gets a “glow”; it “rejoices.”

Was ever better visual music made of words?

And, yes, of course, the village forge is the hearth – the root of which word is heart – of the village.

We look at screens. In more cases than not we look alone. Our “idle company” idles away in a Starbucks.

Who’s having a richer experience? Who’s got it better?

I know which scene I’d rather be a part of. And can’t – because I was born a century too late.

Gotta go now. That’s that monster of hypocrisy Mr. Pecksniff coming down the street. He’s about to go in his house. Got the front-door open. But the wind is going to give it such a cuffing it’ll swing right back and thwack him. Put him down. Stretch him out at the foot of the steps.

“In the meantime, Mr. Pecksniff, having received from a sharp angle in the bottom step but one, that sort of knock on the head which lights up, for the patient’s entertainment, an imaginary general illumination of very bright short-sixes, lay placidly staring at his own street-door.”

And if you’re wondering, short-sixes are cigars. Pecksniff’s not seeing stars – he’s seeing the fiery tips of cigars. Maybe the short-sixes belong to the face of melancholy night  – smoking a clutch of short-sixes like Pan playing away at his pipes. Puffing contentedly and taking delight in – “rejoicing.” At what’s just happened.

Laureate of the city – this city – for sure. But Dickens could also do justice to the English village. Give it, when he wanted to, the full measure of his genius’s devotion.