The Burghers of Calais


Up-close with one of the great works of art in London. David examines Rodin’s The Burghers of Calais… 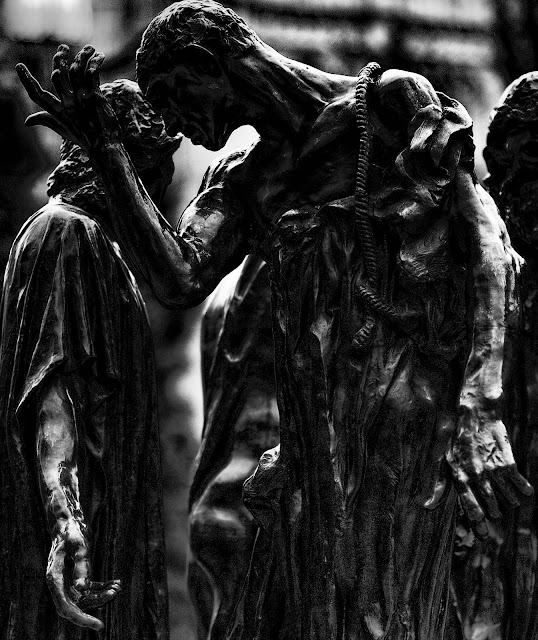 “Their last supper was excrement.

They were eating merde because that’s all there was to eat.

After they finished off the last rat and the last mouse.

They being the “Burghers of Calais”.

We see them here. Well, two of them. As depicted In the Victoria Tower Gardens’ cast of Rodin’s famous sculpture.

Context and connections. Which is by way of saying, to properly “read” the sculpture – an effort that pays huge dividends – you have to know a bit of the history.

Certainly more than the inscription tells us.

Which is this. The English besieged Calais in 1346-47. Six prominent citizens – burghers – handed themselves over to the besieging English, saying “kill us, but spare our city”. It goes on to say that their lives were in fact spared thanks to the intercession of Edward’s queen, Philippa of Hainault.

Which doesn’t begin to do justice to the episode.

Some context. Let’s start by reminding ourselves that eating excrement and narrowly escaping death at the hand of Edward’s headsman was as nothing compared to what was just ahead for them.

And for everybody else in their world.

The Siege of Calais – one of the first episodes in the Hundred Years War – ended in August of 1347. The very moment when all of Europe stood on the brink of the most lethal catastrophe in history.

A catastrophe that in the words of one contemporary was “the end of the world”.

Yes, the onset of the Black Death was just two months away…” 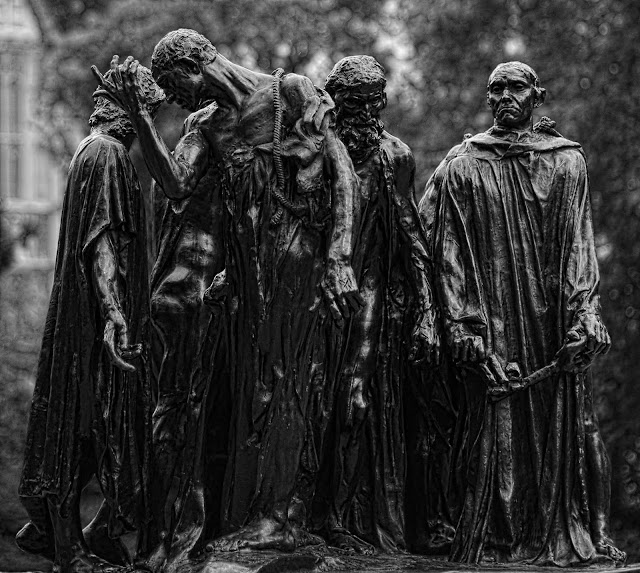 Think of the heroine of the Burghers of Calais tale, Philippa. She would lose two of her 14 children to the Black Death. At Calais Philippa was heavily pregnant with her tenth child and she interceded because she thought killing the burghers would be bad karma for her unborn child.

That was what was ahead for these people. What was behind was that just a month previously the burghers, with the English looking on, had watched 500 of their children and their old starve to death just outside the city walls. They’d expelled them from the city so that the final reserves of food could go to the remaining healthy men and women. The English wouldn’t let the children and the oldsters approach their siege lines, let alone give them a free pass through. They starved to death beneath the walls of Calais. Under the eyes of besieger and besieged.

But given what was two months in the future for one and all, that was a mercy.

And the immediate future – the next ten minutes – for these six men? King Edward was furious that Calais had dared to resist him. He thought he was King of France, after all. And in any case Calais had been a hotbed of piracy in the past – its ships had preyed on English commerce. In short, “exemplary punishment”, as it was known – genocide we’d be tempted to call it today – was on the cards.

The king’s advisers – including, incidentally, Sir Walter de Manny, he of Charterhouse fame – counseled against mass murder. Edward compromised. He said, “all right I want their six richest citizens. I want them to walk out of that place in their shirts, their feet bare, with the keys of the city, and ropes round their necks. “

Which of course is precisely what Rodin shows us in the sculpture. The ropes, incidentally, signified the victor’s right to hang them at will.

Edward said, “on them I shall work my will. The rest I will receive to my mercy.”

At which point Philippa’s unborn child kicked in the womb.

1) Edward said to Philippa, “Ok, they’re yours. Deal with them as you please. That meant their property was hers as well as their bodies. One of the six was John Daire, the richest man in Calais.

Philippa saved his life but she helped herself to his houses.

2) It’s not just the Rodin sculpture that puts us in mind of those long ago times. The Prince of Wales’ feathers also waft us right back to the 1340s. (Watch this space!)

3) Calais was “English” until 1558. The recovery of Calais. The French had their cause; the Hundred Years War its lifeline.

Ask David all about it in person on Thursdays on the Old Westminster Walk.

Email ThisBlogThis!Share to TwitterShare to FacebookShare to Pinterest
Labels: David Tucker, The Burghers of Calais